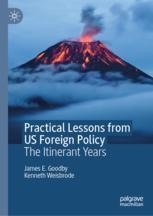 In foreign policy, the Trump administration has appeared to depart from long-standing norms of international behavior that have underwritten American primacy for decades in a more interdependent and prosperous world. In this book, a diplomat and a historian revisit that perception by examining and reproducing several of their own essays during the past twenty years. The essays reveal that Trump's style exaggerates tendencies towards unilateralism already present in the actions, if not the policies, of previous presidents, and in their neglect of three imperatives: collective security, regional integration, and diplomatic imagination. It is not too late, however, to remedy the problem by learning the lessons of the recent past.

James E. Goodby is Annenberg Distinguished Visiting Fellow at the Hoover Institution, USA. He is a retired diplomat who was involved in the creation of the International Atomic Energy Agency, and in the negotiation of the limited nuclear test ban treaty, START, the Conference on Disarmament in Europe, and cooperative threat reduction (the Nunn-Lugar program).
Kenneth Weisbrode is Assistant Professor in the Department of History at Bilkent University, Turkey. He is a former defense analyst who has worked at the Atlantic Council of the United States, the European University Institute, the International Institute for Strategic Studies, and the United States Institute of Peace.

“This interesting book touches on a variety of critical questions about America’s role in the world since the Cold War. Even though I do not fully agree with all of its arguments, I believe it will provoke productive—and badly needed—discussion about the road traveled and the road ahead.” (Hal Brands, author of American Grand Strategy in the Age of Trump (2018))

“There is one immutable fact about cooperative security—when practiced well, it works. Countries can solve together problems that none of them can solve alone. Ambassador Goodby and Professor Weisbrode are superb guides through the past two decades of American policy, pointing out how cooperative security could have helped us—and still could help us—to address global challenges like nuclear proliferation and climate change.” (Gloria Duffy, President, The Commonwealth Club, and former Deputy Assistant Secretary of Defense)

“The idea that America has lost its vision of global leadership has become a commonplace in the era of Trump. This thoughtful and wide-ranging compilation of op-eds reveals both the deeper history of these developments and the existence of longstanding efforts to counter them. For two decades, the esteemed diplomat-historian duo of Goodby and Weisbrode have delivered a series of prophetic warnings about the dangers and consequences of America’s failure to apply and adapt the principles of collective security—diplomacy, international institutions, and regional alliances—to a rapidly changing and globalizing world. Together with their reflections on these writings, this volume offers a nuanced assessment of the US international order that dominated the second half of the twentieth century, as well as a rebuke of the dark ‘America First’ nationalism that has reemerged in the Trump era. This sober yet ultimately hopeful book is vital reading for the current and future generation of America’s leaders and all who are dedicated to the prospect of a more peaceful, equitable, and sustainable world.” (Hannah Gurman, author of The Dissent Papers: The Voices of Diplomats in the Cold War and Beyond (2012))

“This engaging collaboration of a diplomatic practitioner and a political historian offers its analysis and critique of US foreign policy—the good, the bad, and the ugly—in the years 1998–2015. Arrogance and ignorance, we learn, have appeared in American leadership predating the Trump administration.” (Peter J. Katzenstein, Walter S. Carpenter, Jr. Professor of International Studies, Cornell University, USA)