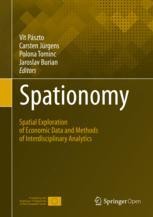 Spatial Exploration of Economic Data and Methods of Interdisciplinary Analytics

This open access book is based on "Spationomy – Spatial Exploration of Economic Data", an interdisciplinary and international project in the frame of ERASMUS+ funded by the European Union. The project aims to exchange interdisciplinary knowledge in the fields of economics and geomatics. For the newly introduced courses, interdisciplinary learning materials have been developed by a team of lecturers from four different universities in three countries. In a first study block, students were taught methods from the two main research fields. Afterwards, the knowledge gained had to be applied in a project. For this international project, teams were formed, consisting of one student from each university participating in the project. The achieved results were presented in a summer school a few months later. At this event, more methodological knowledge was imparted to prepare students for a final simulation game about spatial and economic decision making.  In a broader sense, the chapters will present the methodological background of the project, give case studies and show how visualisation and the simulation game works.

Vít Pászto obtained his PhD in the field of geoinformatics and cartography and is currently working at the Moravian Business College Olomouc and Palacký University Olomouc, in the  Czech Republic. His scientific interests cover topics such as geocomputation, spatial analysis of economic data, GIS-based human geography, and geographical education. Over the last couple of years, he has been leading a project “Spationomy” focusing on spatial exploration of economic data and methods for interdisciplinary analytics. He has (co)authored several peer-reviewed scientific, books and conference contributions, and he is an active member of national scientific associations in the field of geoinformatics, geography, and cartography. He received the Best Map award of Journal of Maps in 2015, and a scholarship for young scientists or professionals in cartography and GIScience from the International Cartographic Association in 2017.

Carsten Jürgens is a full professor for remote sensing in the geomatics group within the geography department at Ruhr-University in Bochum, Germany. He earned his PhD degree from Trier University in 1992 and then moved to University of Regensburg for an assistant professorship. In 1999 he finished his habilitation there. His areas of expertise are: Remote Sensing, Digital Image Processing, Photogrammetry and GIS. He published more than 75 papers in books and national as well as international journals. From 2000 – 2012 he was leading and co-leading several international working groups within the International Society for Photogrammetry and Remote Sensing (ISPRS). Since 2003 he is te\he leading chairman of the EARSeL (European Association of Remote Sensing Laboratories) working group “Urban Remote Sensing”. He was guest editor of four Special Issues of the International Journal of Remote Sensing and the IEEE Transactions on Geoscience and Remote Sensing. From 2003-2013 he served as editor of the German journal „Photogrammetrie – Fernerkundung – Geoinformation“ (PFG). Also he reviewed numerous articles for many national and international journals. Since 2017 he is the chairperson of the Interdisciplinary Center for Geoinformation at Ruhr-University Bochum. Polona Tominc, PhD, is a full-time Professor in the Department of Quantitative Economic Analysis at the Faculty of Economics and Business, University of Maribor, in Slovenia. Her research is focused on statistical methods in economics and business sciences, especially in the field of entrepreneurship, gender differences and behavioural differences between social groups in different fields of management. She has published 65 original scientific papers, with more than 30 of them in the Scopus or WoS databases and has participated with more than 50 papers at scientific conferences. She is an active member of national scientific associations in the field of statistics and operational research. She is a leader of the Slovenian research program “Entrepreneurship for Innovative society” at the University of Maribor and is participating as a team member in Global Entrepreneurship Monitor Slovenia and Slovenian entrepreneurship observatory research teams. Jaroslav Burian received his PhD in Cartography, Geoinformatics and Remote Sensing from Charles University, Prague in 2012. He has been working as an assistant professor focused on geoinformatics in human geography at the Department of Geoinformatics, Faculty of Science, Palacký University, since 2007. He teaches courses that focus on geoinformatics applied in public administration, spatial planning and human geography. His professional specialisation is primarily on the issues of urban planning and modelling of the urban processes in GIS. He developed the Urban Planner model that is used in several Czech regions. As the author or co-author, he has more than 60 scientific and popular articles and has co-authored two atlases and four books. He is an active member of Czech Association for Geoinformation and a member of the EMI journal editorial board.
Show all