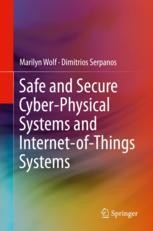 ​This book provides the first comprehensive view of safe and secure CPS and IoT systems.  The authors address in a unified manner both safety (physical safety of operating equipment and devices) and computer security (correct and sound information), which are traditionally separate topics, practiced by very different people.

Dimitrios Serpanos holds a PhD in Computer Science from Princeton University since 1990. He received his Engineering Degree in Computer Engineering & Informatics from the University of Patras in 1985  and his MA in Computer Science from Princeton University in 1988. Between 1990 and 1996 he was a Research Staff Member (RSM) at IBM Research, T.J. Watson Research Center working in the area of systems architecture for high bandwidth systems. Between 1996 and 2000 he was faculty member at the University of Crete (Computer Science) and a researcher at ICS-FORTH. Since 2000 he has been a professor at the University of Patras, Dept. of Electrical & Computer Engineering, working in the area of computer architecture, embedded and cyber-physical systems with emphasis on cybersecurity, industrial systems, and network and multimedia systems.  He is the Director of the Industrial Systems Institute/ATHENA, where he served as Director also during 2008-2013. He has served as President of the University of Western Greece. He has been working on computer architecture, embedded systems, and cybersecurity for more than 25 years, with special emphasis on building real systems and prototypes that are tested in the lab or in the field.

Marilyn Wolf received her bachelor's, master's, and doctoral degrees in electrical engineering from Stanford University in 1980, 1981, and 1984, respectively. She was with AT&T Bell Laboratories in Murray Hill, N.J. from 1984 to 1989 and was with Princeton University from 1989 until 2007. In 2007, Dr. Wolf joined Georgia Tech as the Rhesa "Ray" S. Farmer, Jr. Distinguished Chair in Embedded Computing Systems and Georgia Research Alliance Eminent Scholar. Her research interests include embedded computing, cyber-physical and IoT systems, and embedded computer vision. She has received the IEEE Computer Society Goode Memorial Award, the ASEE Terman Award, and IEEE Circuits and Systems Society Education Award.