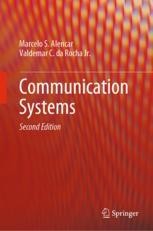 This revised textbook fully updates its comprehensive coverage of Fourier transform, convolution, and definitions of autocorrelation and power spectral density.

The new edition reflects the emergence of a variety of new services and systems. It continues to cover the concepts of probability, random variables, and stochastic processes in full, but brings them up to speed for the modern context. The book now features a new appendix on LTE, fully revamped of figures and tables, new information on AM-VSB Modulation, new examples related to new digital television standards, and a thoroughly revamped chapter on Mobile Cellular Telephony. All major topics including channel modeling, channel characteristics, and propagation are still covered, with an emphasis on simple models.

Many updated examples are provided as well as problems at the end of each chapter to allow the reader to practice the acquired knowledge.

Valdemar C. da Rocha, Jr. received his PhD degree in electronics from the University of Kent at Canterbury, England, in 1976. In 1976, he joined the faculty of the Federal University of Pernambuco, Recife, Brazil, as an Associate Professor and founded the Electrical Engineering Postgraduate Program. He has been a consultant to both the Brazilian Ministry of Education and the Ministry of Science and Technology on postgraduate education and research in electrical engineering. He was the Chairman of the Electrical Engineering Committee in the Brazilian National Council for Scientic and Technological Development for two terms. He is a founding member, former President and Emeritus Member of the Brazilian Telecommunications Society. He is also a Life Senior Member of the IEEE Information Theory Society and Communications Society, and a former member of the Alexander Graham Bell Medal Committee. He is a Fellow of the Institute of Mathematics and its Applications.