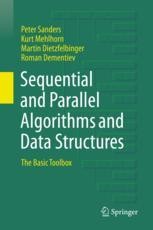 This textbook is a concise introduction to the basic toolbox of structures that allow efficient organization and retrieval of data, key algorithms for problems on graphs, and generic techniques for modeling, understanding, and solving algorithmic problems. The authors aim for a balance between simplicity and efficiency, between theory and practice, and between classical results and the forefront of research. Individual chapters cover arrays and linked lists, hash tables and associative arrays, sorting and selection, priority queues, sorted sequences, graph representation, graph traversal, shortest paths, minimum spanning trees, optimization, collective communication and computation, and load balancing. The authors also discuss important issues such as algorithm engineering, memory hierarchies, algorithm libraries, and certifying algorithms. Moving beyond the sequential algorithms and data structures of the earlier related title, this book takes into account the paradigm shift towards the parallel processing required to solve modern performance-critical applications and how this impacts on the teaching of algorithms.

The book is suitable for undergraduate and graduate students and professionals familiar with programming and basic mathematical language. Most chapters have the same basic structure: the authors discuss a problem as it occurs in a real-life situation, they illustrate the most important applications, and then they introduce simple solutions as informally as possible and as formally as necessary so the reader really understands the issues at hand. As they move to more advanced and optional issues, their approach gradually leads to a more mathematical treatment, including theorems and proofs. The book includes many examples, pictures, informal explanations, and exercises, and the implementation notes introduce clean, efficient implementations in languages such as C++ and Java.

Peter Sanders is a professor of computer science at the Karlsruhe Institute of Technology. He is a leading researcher in the area of theoretical and experimental algorithm analysis, in particular related to efficient algorithms for parallel processing and communication in networks. He won the Gottfried Wilhelm Leibniz Prize of the German Research Foundation in 2012.

Kurt Mehlhorn has been a professor of computer science at Saarland University since 1975, and a director of the Max Planck Institute for Informatics in Saarbrücken. He was appointed a Fellow of the ACM (1999) "for important contributions in complexity theory and in the design, analysis, and practice of combinatorial and geometric algorithms." He has coauthored over 250 refereed conference papers and journal articles, in collaboration with 200 researchers. He received the Gottfried Wilhelm Leibniz Prize of the German Research Foundation in 1987 and the Konrad Zuse Medal of the German Society for Informatics in 1995.

Martin Dietzfelbinger is a professor of computer science at the Ilmenau University of Technology. His research interests include complexity theory and algorithms, in particular the design and analysis of randomized data structures and algorithms, hash functions, applications of hashing, sorting, algorithm engineering, and the complexity of parallel and distributed computation.

The authors have considerable experience teaching on the topic of algorithms and working on related industrial projects.

“The style of the book is accessible and is suitable for a wide range of audiences, from mathematicians and computer scientists to researchers from other fields who would like to use parallelised approaches in their research.” (Irina Ioana Mohorianu, zbMATH 1445.68003, 2020)