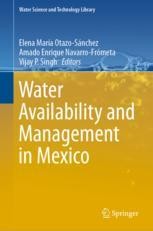 Water Availability and Management in Mexico

This book presents several complex case studies related to water management and planning in the context of pollution, growing demands, and global climate change in Mexico, but which are also relevant for other countries in Latin America. These concerns are of critical importance for policymakers who are coping with multiple conflicting interests.

Water availability in Mexico is polarized, with abundant rainfall and large rivers in the south, and desert-like conditions in the north. The central region, which is the most industrialized, is overpopulated. Mexico City pours millions of cubic meters of “blackwater” into the northern valley daily and receives its clean water from the south. To address these unsustainable conditions, the world's 4th biggest water treatment plant went into operation in 2018.

The water infrastructure and governance must satisfy the demands of all sectors, including agricultural, urban, and economic activities. At the same time, water resources are affected by drought, and climate change puts constraints on the supply. As such, regulation and monitoring are important when it comes to adherence to agreed plans and priorities.

The chapters include illustrative case studies in Mexico, such as basins, cities, reservoirs, and aquifers, water supply demand assessment, planning, and management.

Elena M. Otazo-Sanchez is a Full Professor in the Chemistry Department at Hidalgo State Autonomous University awarded as National Researcher Grade II by The Mexican National Council for Science and Technology (CONACYT). She received her B.S., M.S., and Ph.D. degrees in Chemistry at Havana University, where she was a full professor. Granted with a Patrimonial Cathedra by CONACYT and 21 national and international projects, invited professor at Havana University, Barcelona Autonomous University, Moskow State University, and Technischen Hochschule „Carl Schorlemmer“ Leuna-Merseburg. Member of the Mexican Environmental Sciences Association, leader and founder of the National Academic Network for Environmental Sciences and Sustainable Development, and member of the Network for Water Quality and Availability. She has led the interdisciplinary research project of the Hidalgo State Program for Climate Change Actions. Professor Otazo has graduated tents of BSc, MSc and Ph.D. pupils, published the results in hundreds of journals, conference papers, books and book chapters in water quality, heavy metal sensor ionophores, materials for water treatment, basins, groundwater, water resources, GHG emissions, and mitigation scenarios. For his scientific contributions, she has received national and international honors.

Amado Enrique Navarro Frómeta is a Full Time Professor in the Food Technology Department at the Technological University of Izúcar de Matamoros, México and recognized National Researcher Grade I by The Mexican National Council for Science and Technology (CONACYT). He received his B.S., degree in Chemistry at Havana University and his PhD degree in the Institute of Petroleum and Chemistry of Azerbaidzhan (at the present time the Petroleum Academy). He is member of the American and Cuban Chemical Societies, leader of the CONACYT Network for Water Quality and Availability. He has led various scientific Projects and has graduated 30 BSc students and 13 MSc and Ph.D., published the results of his scientific research in 42 journal papers, 102 conference proceedings, 14 books and book chapters in petroleum, environmental and analytical chemistry. For his scientific contributions, he has received 6 awards.

Vijay P. Singh is a Distinguished Professor, a Regents Professor,  and Caroline and William N. Lehrer Distinguished Chair in Water Engineering at Texas A&M University. He received his B.S., M.S., Ph.D. and D.Sc. degrees in engineering. He is a registered professional engineer, a registered professional hydrologist, and an Honorary diplomate in water resources engineering of the American Academy of Water Resources Engineers. Professor Singh has extensively published the results of an extraordinary range of his scientific pursuits. He has published hundreds of journal and tens of books and book chapters in hydrology, ground water, hydraulics, irrigation engineering, environmental engineering, and water resources. For his scientific contributions to the development and management of water resources and promoting the cause of their conservation and sustainable use, he has received more than 95 national and international awards and numerous honors, including three honorary doctorates. He is a Distinguished Member of ASCE, an Honorary Member of American Water Resources Association, and a fellow of EWRI, AWRA, IWRS, ISAE, IASWC and IE and holds membership in 11 international science/engineering academies. He has served as President and Senior Vice President of the American Institute of Hydrology (AIH) and is currently President-Elect of American Academy of Water Resources Engineers..