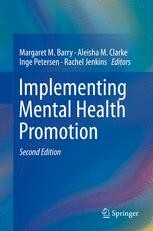 This book offers a comprehensive overview of current research, policy, and practice developments in promoting mental health and well-being. It offers guidance on developing and delivering mental health promotion interventions across a variety of settings internationally. Chapters outline key mental health promotion concepts, implementation processes, and outcomes through empirical findings, practical advice based on successful evidence-based approaches, and templates for action. In addition, chapters answer key “how” questions on practical implementation as well as the “whys”, providing rationales for mental health promotion and identifying the key factors and underlying principles that make these interventions work.  The book includes examples of evidence-based practice with 17 case studies of innovative interventions from different international settings. These case studies illustrate the practical aspects of intervention development and delivery and the realities of implementing policies and programes outside of controlled research conditions.

·         Mental health promotion in the home for children and parents.

Margaret M. Barry, Ph.D., holds the Established Chair in Health Promotion and Public Health, and is Head of the World Health Organization Collaborating Centre for Health Promotion Research, at the National University of Ireland Galway. Professor Barry has published widely in mental health promotion and works closely with policymakers and practitioners on the development, implementation and evaluation of mental health promotion interventions and policies at national and international level. Professor Barry has extensive experience of coordinating international and European collaborative projects, serving as project leader on WHO global projects and European Union funded research initiatives. Professor Barry also serves on a number of international steering groups and scientific committees and has acted as expert adviser on mental health promotion policy and research development in a number of countries around the world.  Professor Barry was re-appointed in 2016 for a second term to the European Commission Expert Panel on Effective Ways of Investing in Health (2016-2019) and was elected as global President of the International Union for Health Promotion and Education in 2019.

Aleisha M. Clarke, Ph.D., is Head of What Works, Child Mental Health & Wellbeing at the Early Intervention Foundation in London, UK.  Prior to this, she held a Marie Skłdowska-Curie postdoctoral research fellowship at the Department of Psychology, Health and Technology at the University of Twente in the Netherlands. Dr Clarke’s research interest lies in the development, implementation, and evaluation of evidence-based mental health and wellbeing programmes for children and young people. Dr. Clarke completed her doctorate and post-doctoral studies at the World Health Organization Collaborating Centre for Health Promotion Research, at the National University of Ireland Galway. Her PhD focused on the evaluation of Zippy’s Friends in Ireland and her postdoctoral research on the use of online technologies to support positive youth mental health. She trained as a primary school teacher and taught in a primary school in Dublin, Ireland, for four years.

Inge Petersen, Ph.D., is Director of the Centre for Rural Health at the University of KwaZulu-Natal and Visiting Professor, Institute of Psychiatry, Psychology and Neuroscience, Kings College London. Dr Petersen is a public mental health psychologist with expertise in policy development, research, and training in low- and middle-income countries with a specific focus on integration of mental health into primary health care as well as mental health promotion and prevention. Dr Petersen has played a leading role on a number of international research consortiums focused on increasing access to mental health services in low- and middle-income countries. Among other roles, she has also been a WHO (World Health Organization) special adviser on mental health promotion and prevention to the Eastern Mediterranean Region’s to Scale up Action on Mental Health in the Eastern Mediterranean Region (2014); Lead author on the population and community level intervention chapter for the DCP3 volume on Mental, neurological and substance-abuse disorders; Member of the Advisory Group for scaling up mental health in preparation for the 2016 World Bank World Health Organization high level event "Out of the Shadows: Making Mental Health a Global Development Priority”.

Rachel Jenkins, Ph.D., is Emeritus Professor of Epidemiology and International Mental Health Policy, Department of Health Service and Population Research; was formerly Director of the WHO Collaborating Centre (1997-2012), Institute of Psychiatry, King’s College London; and prior to that was Principal Medical Officer, Mental Health Division, Department of Health, England (1987-1996). As a psychiatrist, epidemiologist and policy maker, Professor Jenkins provides policy support and training on request to governments, and carries out research in the UK, Africa, the Middle East, and Asia. She has both led and collaborated on multiple international research, policy and implementation projects, has been a trustee of a variety of national and international non-governmental organisations, and has been a frequent consultant to WHO, EC, DFID  and the World Bank.