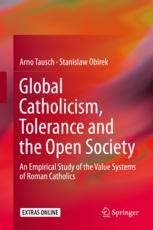 An Empirical Study of the Value Systems of Roman Catholics

This book systematically assesses the political and social values of the more than 1.3 billion Catholics around the globe, by far the largest denomination of Western Christianity. Based on an extensive analysis of data from the World Values Survey and other global opinion surveys, the book sheds new light on the value systems and opinions of Roman Catholics. The authors highlight core problems and challenges the Church is currently facing in adapting to the modern world, including Catholic anti-Semitism, religious and sexual tolerance, and opinions towards democracy, while also offering an anthropological reflection on how well the Church is adapting or failing to adapt to the requirements of an open society.

Arno Tausch is an Honorary Associate Professor of Economics at Corvinus University, Budapest, Hungary, and an Adjunct Professor of Political Science at Innsbruck University, Austria. From 1992 to his retirement in 2016, he worked at the Austrian Ministry of Social Affairs, in the area of European Union and International Affairs. He has authored or co-authored books and articles for major international publishers and for leading global strategy think tanks in Austria, Israel, Poland, and Russia, including 11 articles indexed in the Central and Eastern European Online Library database. He is a co-author of the book “Islamism, Arab Spring and the Future of Democracy,” published with Springer in 2019.

Stanislaw Obirek, a culture anthropologist, is a Professor at the American Studies Center, Warsaw University, Poland. He was a visiting professor at Holy Cross College in Worcester, MA (2000), and a fellow at St. Louis University (2004). His books include “Catholicism as a Cultural Phenomenon in the Time of Globalization: A Polish Perspective” (2009); “Liberated Mind. In Search of a Mature Catholicism” (2011); and “Pole Catholic?” (2015). His main interests are in the place of religion in modern cultures, interreligious dialogue, and strategies for overcoming conflicts between different civilizations and cultures. He has published articles in journals such as “Shofar. An Interdisciplinary Journal of Jewish Studies,” and including 19 articles indexed in the Central and Eastern European Online Library database.