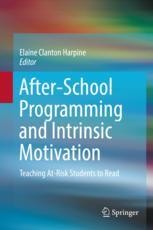 This book examines the eight-year development of the Reading Orienteering Club after-school program, showing how to develop, test, change, and adapt an after-school program to fit the needs of the children who attend. It includes case studies and data reports for each year and presents the theory, application, and program evaluation steps that workers in the field or students learning about program design must follow. Chapters present first-person accounts as well as statistical evaluations of the effectiveness of the reading program with each group of children. In addition, chapters highlight the changes that were made in program design and why each change was implemented, giving practitioners the insights needed to adapt interventions and strategies to their own programs. The book concludes with recommendations from the authors on how to run a successful after-school reading program.

After-School Programming and Intrinsic Motivation is an essential reference for scientist-practitioners, clinicians, researchers, and graduate students in such disciplines as school psychology, childhood education, social work, psychotherapy and counseling, and learning and instruction.

Elaine Clanton Harpine, Ph.D., is a motivational psychologist specializing in group-centered motivational program design. She has 46 years of experience designing and conducting motivational prevention programs for children and youth. Dr. Clanton Harpine earned her doctorate in Educational Psychology, Counseling from the University of Illinois, Urbana-Champaign. She has published 17 nonfiction books, including Teaching At-Risk Students to Read: the Camp Sharigan Method (2016), Group-Centered Prevention in Mental Health:  Theory, Training, and Practice (2015), After-School Prevention Programs for At-Risk Students:  Promoting Engagement and Academic Success (2013), Prevention Groups (2013), Group-Centered Prevention Programs for At-Risk Students (2011), Group Interventions in Schools:  Promoting Mental Health for At-Risk Children and Youth (2008). In addition, her book No Experience Necessary!, which received an Award of Excellence in 1995, was selected as one of the top five children’s books in its class. Other published children’s writings include a two-volume series entitled, Come Follow Me, in 2001, a three-volume family series completed in 2003, a youth book in 1989 along with numerous articles for teenagers on peer pressure, coping with failure, alcohol abuse, parents, suicide, and, more recently, articles on using group-centered interventions in the schools. Other published writings include a series on Erasing Failure in the Classroom, a series of ready-to-use group-centered program packets: Volume 1, the Camp Sharigan program (3rd ed., 2016), Volume 2, Vowel Clustering (2010), and Volume 3, the Reading Orienteering Club (2017). Dr. Clanton Harpine has been interviewed on local early morning TV and radio concerning her workshop “Communication for Married Couples” and has been interviewed on local university radio concerning her work with inner-city children.

Her research for the past 17 years has focused on using group-centered interventions with at-risk readers. Dr. Clanton Harpine designed the motivational reading program called, Camp Sharigan, which she has used extensively in her work and research. She also designed the Reading Orienteering Club after-school prevention program and 4-Step Method for teaching at-risk children to read. Her research with these programs has been published in psychological journals and reported through presentations at the American Psychological Association's annual conventions. In recent years, Dr. Clanton Harpine has been teaching Group Therapy and Counseling, Lifespan Development, and Human Growth and Development at the University of South Carolina, Aiken and is continuing her research with group-centered prevention. She is the past editor for the “Prevention Corner” column, which appears quarterly in The Group Psychologist. She was selected for inclusion in Who’s Who of American Women, 2006-2017 for her work with children in inner-city neighborhoods and at-risk communities.