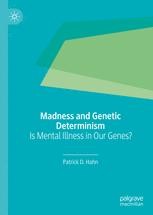 Is Mental Illness in Our Genes?

The book covers important topics in the psychiatric genetics (PG) field. Many of these have been overlooked in mainstream accounts, and many contemporary PG researchers have omitted or whitewashed the eugenic and “racial hygiene” origins of the field. The author critically analyzes PG evidence in support of genetic claims which, given the lack of gene discoveries, are based mainly on the results of psychiatric twin and adoption studies. Given that the evidence in favor of genetic influences is much weaker than mainstream sources report, due to serious issues in twin and adoption research, the author points to environmental factors, including trauma, as the main causes of conditions such as schizophrenia.

Patrick D Hahn is an Affiliate Professor of Biology at Loyola University Maryland, USA, and a freelance writer.

“For many people working in it or having contact with it, modern psychiatry is a pretty weird place. Has it always been this way? Pat Hahn's book traces the weirdness way back. Some of his case histories are jaw-dropping. He will also leave you with a dark suspicion—that a lot of the weirdness, maybe most of it, comes from the researchers.” (David Healy, Professor of Psychiatry at Bangor University, UK, and author of Mania: A Short History of Bipolar Disorder (2008))

“Patrick Hahn has written an important book about psychiatry and psychiatric genetics. He describes troubling aspects of these fields’ histories, and shows that many of the core positions and assumptions of psychiatry and psychiatric genetics are controversial, and are based on very problematic research methods. I recommend this book as a refreshing alternative to mainstream accounts of these fields, which usually emphasize biological treatments and claimed biological causes, and often lose sight of the human condition and the emotionally damaging social, political, and family environments that so many people experience.” (Jay Joseph, clinical psychologist and author of Schizophrenia and Genetics: The End of an Illusion (2017))

“Madness and Genetic Determinism is a meticulously documented account of arguably the worst scientific catastrophe of recent times. Patrick Hahn has managed to turn the tragic and shameful history of psychiatric genetics into a riveting human saga.” (John Read, Professor of Clinical Psychology at the University of East London, UK, and editor of Models of Madness: Psychological, Social, and Biological Approaches to Schizophrenia (2004))