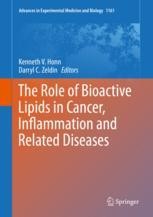 The Role of Bioactive Lipids in Cancer, Inflammation and Related Diseases

The Organizing Committee of the 15th International Conference on Bioactive Lipids in Cancer, Inflammation and Related Diseases compiled a group of junior investigators to provide reviews on the topics they presented at the Puerto Vallarta Bioactive Lipids conference, as part of the book series, Advances in Experimental Medicine and Biology (AEMB). The book in this series will be titled Bioactive Lipids in Cancer, Inflammation and Related Diseases. Topics range from all classes of lipids including prostaglandins, resolvins, spingolipids, P450-derived lipids, endocannabanoids and phospholipids. The focus includes physiology, cell biology, and structural studies in organisms from bacteria to humans and how these studies addressed the role of lipids in various disease i.e. cancer, inflammation, diabetes, obesity, cardiovascular disease and others.

Kenneth Honn, Ph.D., is a Distinguished Professor in the Wayne State University School of Medicine’s Departments of Pathology and Oncology and an adjunct professor in the WSU Department of Chemistry. He is director of the Bioactive Lipids Research Program and serves as a member of the Cancer Biology Graduate Program and of the Barbara Ann Karmanos Cancer Institute. He is the founding member and president of the Eicosanoid Research Foundation and chairman of the International Conference on Bioactive Lipids in Cancer, Inflammation and Related Diseases, a biennial international conference he initiated in 1989. Dr. Honn received his Ph.D. in endocrinology from Wayne State University in 1977. With more than 30 years of experience in the fields of cancer, inflammation and bioactive lipids, his laboratory focuses on bioactive lipids and integrin receptors and the role they play in various aspects of tumor progression, namely, cell growth and apoptosis, angiogenesis and tumor cell matrix interactions. Dr. Honn’s lab concentrates on lipoxygenases, and in particular 12-lipoxygenase and its metabolic product 12(S)-HETE. In addition to his research on bioactive lipids in tumor progression, he has collaborated with scientists at the Perinatology Research Branch of the National Institutes of Health for the past four years, studying the role of lipids in human parturition, in particular, their role in preterm labor and term labor. Research efforts in Dr. Honn’s laboratory have directly led to six clinical trials, and he holds 17 U.S. patents, seven of which are based on the generation of novel chemotherapeutic/radiation sensitizing compounds. Dr. Honn is the author of more than 300 published works. He has had continuous external funding with more than 50 grants totaling in excess of $25 million. He has and continues to serve on numerous study sections, reviewing grants for the National Cancer Institute and the Department of Defense, and he provides consultation to pharmaceutical companies. Dr. Honn is a member of the editorial boards of 12 scientific journals and is co-Editor-in-Chief of Cancer and Metastasis Reviews.

Darryl C. Zeldin, M.D. is the Scientific Director at the National Institute of Environmental Health Sciences (NIEHS), National Institutes of Health (NIH). He is an internationally recognized expert on eicosanoids (lipid mediators) and their role in regulating respiratory and cardiovascular function. Dr. Zeldin received his medical degree from Indiana University in 1986. He completed an Internal Medicine Residency at Duke University Medical Center in 1989 and a Fellowship in Pulmonary/Critical Care Medicine at Vanderbilt University in 1993. He was recruited to the NIH in 1994 and promoted to Senior Investigator with Tenure in 2001. He served as the NIEHS Clinical Director from 2007-2011 prior to becoming Scientific Director in 2011. Dr. Zeldin is Board Certified in Internal Medicine and Pulmonary Medicine, is a Fellow in the American College of Chest Physicians, a Fellow in the American Heart Association and is an elected member of the American Society for Clinical Investigation and American Association of Physicians.   Dr. Zeldin has co-authored over 340 primary peer-reviewed manuscripts and his work has been cited over 25,000 times (h-index 86). He has mentored over 75 post-baccalaureate fellows, graduate students, medical students, postdoctoral research fellows and clinical research fellows. As the NIEHS Scientific Director, he is responsible for one of the largest intramural research programs at the NIH with over 1000 scientists in 10 Departments and 15 Core Facilities, and an annual budget of over $130M. His own research has also been featured on NPR, Good Morning America, USA Today, US News and World Report, PBS, and on other internationally recognized media venues.