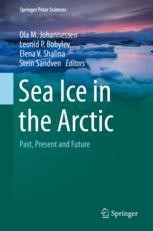 Sea Ice in the Arctic

Past, Present and Future

The chapters provide an extensive overview of the research results related to sea ice in the Arctic at paleo-scales to more resent scales of variations as well as projections for changes during the 21st century.

The authors have pioneered the satellite remote sensing monitoring of sea ice and used other monitoring data in order to study, monitor and model sea ice and its processes.

Prof. Ola M. Johannessen is the President of the Foundation Nansen Scientific Society in Bergen and Visiting Professor at the the Nansen Center/Institute of Atmospheric Physic,CAS,Beijing.

Previously he had faculty  possitions at the Institute of Oceanography,University of Sao Pauli, Geophysical Institute ,University of Bergen,McGill University,Montreal,Naval Post Graduate School in Monterey,USA and Visiting Professor at Peking University,,Beijing He was the Founding Director of the Nansen Center in Bergen in 1987 and later created the Nansen Group which consist of Nansen Centers in Bergen,St.Petersburg,Russia,Cochin,India,Beijing,China ,Cape Town,South Africa and Dahka,Bangladesh.

He has during his entire scientific career been leader of large multidisciplinary international programs in different marine and coastal regions focusing on increasing the knowledge about the Arctic climate and environment. These programs includes  e.g.the Norwegian Remote Sensing Experiment (NORSEX’79); the mega-science Marginal Ice Zone Experiment (MIZEX) 1980-88, with 200 scientists and technicians involved; the Seasonal Ice Zone Experiment (SIZEX) 1989-92; CO2 and Deep Water formation (CARDEEP) 1993-95;tthe ESA/Russian Space Agency "ICEWATCH" Program of the Northern Sea Route 1995-1998. Furthermore he has coordinated many EU,ESA,INTAS, Norwegian Space Center and Research Council of Norway projects, e.g., The Nansen Fellowship Program, the Marine Climate and Ecosystems in the Seasonal Ice Zone (MACESIZ), the EU-IPY Climate of the Arctic and its role for Europe (CARE) project.Presently he is involved in the following scientific fields: Arctic climate system, including sea ice ,internal waves in the Marginal Ice Zone and the effect of the warm subsurface fjord water on the calving of the outlet glaciers in the East Greenland fjords. Resent projects include climate variability and changes in the Eurasian Arctic in the 21st century ,co-funded by the Russian Fund for Basic Research and the  Research Council of Norway.OMJ is the author and co-author of more than 700 publications of which 9 are books and 185 are in referee journals and books (see ResearchGate).The remaining publications are primarily proceedings, technical and special reports including outreach articles for the public. OMJ has been the supervisor for more than 30 Master and PhD students. He has received 12 awards for his research and leadership. He was the Laureate of the EU Descartes Prize in Earth Science in 2005 for leading the project: Climate and Environmental Change in the Arctic (CECA),was awarded the Nansen Foundation Medal for outstanding Research in 2007 and the Knight of first class of the Royal Norwegian Order of St.Olav awarded by the King of Norway,Harald V in 2008.His scientific career has to a very large degree been dedicated to studies of sea ice in the Arctic, which is the main topic of the present book project.

Dr. Leonid P. Bobylev is Director of the Nansen International Environmental and Remote Sensing Centre (NIERSC), St. Petersburg, Russia, and the leader of the Climate Group. His scientific interests include Arctic Climate System and climate change, Arctic amplification and its impact on weather and climate in mid-latitudes, Pan-Arctic hydrological cycle, satellite observations of the Arctic sea ice and atmospheric moisture; satellite monitoring of polar cyclones.

He was Coordinator of the EU FP7 Project “European-Russian Centre for cooperation in the Arctic and Sub-Arctic environmental and climate research (EuRuCAS)”, 2012-2015, and a Nansen Centre Team Leader or Principle Co-investigator in many international research projects.

Dr Elena V. Shalina has been involved in sea ice research and applications since the late 1990s when she joined the Climate Group at the Nansen International and Remote Sensing Centre (NIERSC) in St. Petersburg, Russia. She has been engaged in the passive microwave, scatterometer and Synthetic Aperture Radar remote sensing studies. Her research interests include studying sea ice global transformation and its connections to the rest of the climate system and to climate change, assessing Northern Sea Route perspectives, large-scale mapping of snow on sea ice in the Arctic, mapping of snow-cover characteristics over land and studying permafrost changes. She was a task leader of several international research projects.

Professor Stein Sandven has studied and researched in Marine and polar remote sensing, polar and coastal oceanography, sea ice research with emphasis on remote sensing methodology since 1987. Scientific publications have addressed oceanographic topics such as eddies, fronts, internal waves, ice edge processes and deep convection. The oceanographical studies include also ocean acoustics and acoustical observing systems. Papers with focus on satellite remote sensing are dealing with sea ice observations with different types of sensors, sea ice classification, sea ice drift, and validation of sea ice remote sensing with in situ observations. Recently, papers have been published on development of operational observing systems for the Arctic using both satellite, in situ, and underwater sensors.  From 2009 he has been involved in development of the Svalbard Integrated Observing System (SIOS) which is an EU research infrastructure preparatory phase project staring in 2010.

He has generated several international and national research and application projects related to satellite remote sensing and polar oceanography. He has been leader or task leader of more that 60 research projects. He has been coordinator of 14 EU projects, including the H2020 Integrated Arctic Observing System (INTAROS) due to start in 2016. He has established extensive cooperation with Russian scientists in Arctic climate research, ocean and sea ice research and in satellite earth observation. Many of the ongoing Arctic projects have therefore Russian participation. He has also been instrumental in establishing the Arctic Regional Ocean Observing System (ArcticROOS), which has 16 member institutions form 9 countries.