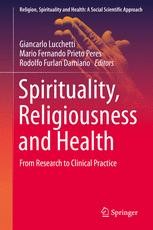 From Research to Clinical Practice

This book provides an overview of the research on spirituality, religiousness and health, including the most important studies, conceptualization, instruments for measurement, types of studies, challenges, and criticisms. It covers essential information on the influence of spirituality and religiousness (S/R) in mental and physical health, and provides guidance for its use in clinical practice. The book discusses the clinical implications of the research findings, including ethical issues, medical/health education, how to take a spiritual history, and challenges in addressing these issues, all based on studies showing the results of incorporating S/R in clinical practice. It contains case reports to facilitate learning, and suggests educational strategies to facilitate teaching S/R to health professionals and students.

Dr. Giancarlo Lucchetti is a physician, specialized in Internal Medicine and Geriatric Medicine. He received his MD from the Santa Casa of São Paulo Medical School, Brazil and his PhD from the Federal University of São Paulo, Brazil. He currently works as an Associate Professor at the school of Medicine from the Federal University of Juiz de Fora (UFJF), Brazil. Currently, he is the leader of the Geriatric and Gerontology Research Group (NUGGER) and Research coordinator of the Department of Medical Education at UFJF. He also works supervising PhD students in the Health and Public Health programs at UFJF. He is also a Grantee of Research Productivity Scholarship – Level 2 in the area of Medicine for the Brazilian National Council for Scientific and Technological Development (CNPq). He is enrolled in several research projects concerning the following areas: “Geriatrics and Gerontology”, “Medical Education” and “Spirituality and Health”, being one of the most prolific authors in the area of "Spirituality and Health"in the last decade. He also serves as an editorial reviewer for several indexed journals and has currently more than 150 published or accepted articles in indexed scientific journals.

Dr. Rodolfo Furlan Damiano is a psychiatry resident at Institute of Psychiatry of University of São Paulo (USP). Graduated in Medicine from Pontifical Catholic University of São Paulo (2011-2017), receiving scholarship from Brazilian Scientific Mobility Program (CAPES) to study at Southern Illinois University at Carbondale (2014-2015). Member of the Health, Spirituality and Religiosity Program (Pro-SER) and former member of the Brazilian Medical Spiritist Association - Student Department. Co-editor of the books "A new medicine for a new millennium: the humanization of the medical education" and "Letters to Dr. Bezerra de Menezes", both published in Brazilian Portuguese language. Also, he ia a co-autor of the book "O Problema do Ser, do Destino e da Dor: 100 anos Depois". He also worked as a technical reviewer of the Brazilian third edition of Dr. Harold Koenig Book "Spirituality in Patient Care". His research areas are "Spirituality and Health", "Medical Education", "Empathy", and "Learning Environment".