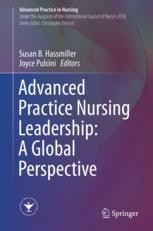 This book is distinctive in its focus on Advanced Practice Nursing leadership globally. It has a unique structure, first highlighting global APN leadership and then including case studies on leadership from various regions around the world. This beneficial and practical book has a specific emphasis on academic, clinical and policy leadership and is relevant for all readers. Finally, a section on leadership development focuses on coaching and mentoring, business acumen, collaboration and patient advocacy provides an important contribution.

Authors are distinguished APN leaders from around the world along with junior authors who are emerging leaders being mentored by these leaders.

This book will appeal to APN clinicians, students and emerging leaders who want to bring important global lessons to their work.  The book will become an indispensable part of the libraries of all APN leaders at all stages in their development worldwide.

Dr. Hassmiller’s work has included service in public health settings at the local, state and national levels, including Health Resources & service Administration (HRSA). She taught community health nursing at the University of Nebraska and George Mason University in Virginia.

She is a an elected member of the National Academy of Medicine, a fellow in the American Academy of Nursing and sits on other advisory committees and boards, including the Hackensack Meridian Health System and the American Red Cross. She is the recipient of many awards and three honorary doctorates, but most notably the Florence Nightingale Medal, the highest international honor given to a nurse by the International Committee of the Red Cross.Dr. Joyce Pulcini joined George Washington University School of Nursing as a Professor in 2012 and until July of 2018 was the Director of Community and Global Initiatives and Chair of the Acute and Chronic Care Community. With a career of over 30 years as a pediatric nurse practitioner (PNP), educator and author, Dr. Pulcini directed three nurse practitioner programs and has consistently been a leader in health care and nursing policy at local, state and national levels. She is a Fellow of the American Academy of Nursing, serving as Inaugural Co-Chair of the Expert Panel on Primary Care, a Fellow of the American Academy of Nurse Practitioners and a former Primary Care Policy Fellow. She is a Senior Associate Editor for Policy, Politics and Nursing Practice. Dr. Pulcini has authored more than 70 peer reviewed articles, chapters, policy papers and two editions of a well-known textbook on pediatric primary care.


She is an expert on the evolving nursing roles of the nurse practitioners nationally and internationally and specifically focused on nurse practitioner education, reimbursement and political advocacy and on barriers to the practice of nurse practitioners. She led a team conducting survey research on education, practice and regulation of advanced practice nurses of APNs internationally. Most recently she worked with PAHO on the evolving role of APNs in Latin America and the Caribbean. She has been an active member of the International Nurse Practitioner/Advanced Practice Nursing Network (INPAPNN) of the ICN for more than two decades having served as Chair of on the Education/Practice Subgroup and as a member of the Core Steering Group. She is currently working on a revision of the International NP/APN survey with members of the INPAPNN.