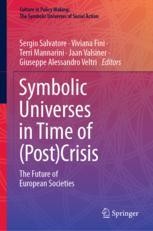 Symbolic Universes in Time of (Post)Crisis

The Future of European Societies

This book investigates whether, how and where the cultural milieu of European societies has changed as a result of the socio-economics crisis. To do so, it adopts a psycho-cultural approach, which views the cultural milieu as a set of meanings, placing the generalized image social actors have of themselves, the world, events and their relationships in the context of the socio-political and institutional environment, including policies. By analyzing the changes in cultural milieu and social identity, the book develops strategic and methodological guidelines for the design of post-crisis policies, providing a concept of how the cultural dynamics are associated with certain individual characteristics and specific socio-economic phenomena.

Sergio Salvatore: Professor of Dynamic Psychology at the University of Salento. His scientific interests regard the psychodynamic and semiotic theorization of mental phenomena and the methodology of analysis of psychological processes as field dependent dynamics. He also takes an interest in the theory and analysis of psychological intervention in clinical, scholastic, organizational and social fields. On these issues he has designed and managed various scientific projects and published more than two hundred works. Associate editor of Integrative Psychological and Behavioral Science; Research in Psychotherapy: Psychopathology, Process and Outcome; RPC Rivista Psicologia Clinical-Review of Clinical Psychology.

Viviana Fini: Psychologist, Psychotherapist, PhD in Territorial Policies and Local Project. She has conducted action-research activities in the sphere of local, social and organizational development. Those activities were supported by an epistemic and theoretical-methodological re-conceptualization of the “development” concept. At the base of her work, is the focus on socio-symbolic dimensions that orientate the (individual and/or collective) action systems. Author of various articles about the mediation of the socio-symbolic dimensions in the interpretation of public policies.

Terri Mannarini: Associate Professor of Social Psychology at the University of Salento. She is a member of the Executive Committee of the Italian Community Psychology Association and editor-in-chief of the international journal Community Psychology in Global Perspective (http://siba-ese.unisalento.it/index.php/cpgp). Her research interests are focused on the analysis of the psychosocial processes pertaining to collective action and community development. She has been investigating a range of phenomena including protest movements, public decision-making processes, active citizenship, community development interventions, inter-ethnic relationships, and social change. Her research is based on a social and community psychology background, yet with a strong interdisciplinary approach resulting from the integration of social psychology with social and political sciences.

Jaan Valsiner is Niels Bohr Professor of Cultural Psychology at Aalborg University, Denmark. He is the founding editor (1995) of the Sage journal, Culture & Psychology.  And of The Oxford Handbook of Culture and Psychology (2012). He is also the Editor-in-Chief of Integrative Psychological and Behavioral Sciences  (Springer, from 2007). In 1995 he was awarded the Alexander von Humboldt Prize in Germany for his interdisciplinary work on human development, and Senior Fulbright Lecturing Award in Brazil 1995-1997. He has been a visiting professor in Brazil, Japan, Australia, Estonia. Germany, Italy, United Kingdom, Norway,  Luxembourg and the Netherlands.

Giuseppe Veltri holds a BSc in Psychology of Communication from the University of Siena, an MSc in Social Research Methods from the Methodology Institute of the London School of Economics (LSE) and a PhD in Social Psychology from the LSE. He is a Lecturer at University of Leicester and Honorary Fellow at Faculty of Engineering of the University of Bristol. He has been Lecturer at University of East Anglia and a scientific fellow at the European Commission JRC Institute for Prospective Technological Studies (IPTS). Before joining the IPTS, he was a research associate at the Institut Jean Nicod (Ecole Normale Supérieure) in Paris. He has taught extensively in the fields of methodology of social research and social psychology. His current research agenda and his research-led teaching focuses on two areas: 1) The study of public opinion dynamics and social representations using a computational social science framework; 2) psychological theories of communication and, in particular, with an emphasis on bounded rationality and ‘nudge’ interventions (heuristics based).