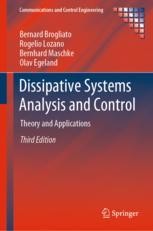 The third edition of the now standard Dissipative Systems Analysis and Control presents a revised and expanded treatment of dissipative systems theory, constituting a self-contained, advanced introduction for graduate students, researchers and practising engineers. It examines linear, nonlinear and nonsmooth systems, with many examples in each chapter; occasional infinite-dimensional examples are also included. Throughout, emphasis is placed on the use of the dissipative properties of a system for the design of stable and robust feedback control laws or state observers. The theory is substantiated by experimental results and by reference to its application in illustrative physical cases (Lagrangian systems, passivity-based and adaptive controllers are covered thoroughly).

The third edition is substantially updated to accommodate new material within the existing chapter structure. The additions include:

· the design of stable state observers that use passivity as a tool for their stability analysis;

· extended section on discrete-time systems, especially the preservation of dissipativity after discretization;

. an extended chapter on the Kalman–Yakubovich–Popov Lemma; and

. over 1000 references.
Show all
About the authors

Rogelio Lozano was born in Monterrey Mexico, on July 12, 1954. He  received the B.S. degree in electronic engineering from the National Polytechnic Institute of Mexico in 1975, the M.S. degree in electrical engineering from Centro de Investigación y de Estudios Avanzados (CINVESTAV), Mexico in 1977, and the Ph.D. degree in automatic control from Laboratoire d'Automatique de Grenoble, France, in 1981. He joined the Department of Electrical Engineering at CINVESTAV, Mexico, in 1981 where he worked until 1989. He was Head of the Section of Automatic Control from June 1985 to August 1987. He has held visiting positions at the University of Newcastle, Australia, from November 1983 to November 1984, NASA Langley Research Center VA, from August 1987 to August 1988, and Laboratoire d'Automatique de Grenoble, France, from February 1989 to July 1990. Since 1990 he is a CNRS (Centre National de la Recherche Scientifique) Research Director at University of Technology of Compiègne, France.  He was Associate Editor of Automatica in the period  1987-2000. He is associate Editor of the Journal of Intelligent and Robotics Systems since 2012 and Associate Editor in the Int. J. of  Adaptive Control and Signal Processing since 1988.

Bernhard Maschke is Professor of Automatic Control of the University Claude Bernard of Lyon, Villeurbanne, France since 2000. The main streamline of his research is the nonlinear and passivity-based control of complex physical systems. He is one of the main initiators of the Port Hamiltonian formalism which bases the modelling, simulation and control of complex physical systems on network theory and thermodynamic theory. He has used this formalism for complex spatial mechanisms and in the mechatronic context of automotive applications and more recently to chemical enginneering processes and various multi-physics and multi-scale systems such as an adsorption process, a fuel cell or an Ion Polymer Metal Composite.

Olav Egeland is a graduate of the Norwegian University of Science and Technology (NTNU), where he is professor of production automation. He was at Marine Cybernetics AS 2004-2011 as co-founder. He has received the Automatica Prize Paper Award and the Outstanding Paper Award of IEEE Trans. Control Systems Technology, and has been Associate Editor of IEEE Trans. Automatic Control and European Journal of Control. His research is on modelling, simulation and control of mechanical systems with applications to robotics and offshore systems.

“This monograph presents comprehensive presentation general theory and applications of dissipative systems. The modern development of engineering and technology has a significant impact on this area of research. This monograph opens up new possibilities for many researchers in this field to approach the front line of research.” (Anatoly Martynyuk, zbMATH 1432.93001, 2020)