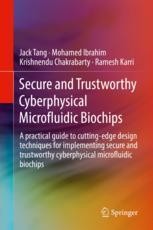 This book describes novel hardware security and microfluidic biochip design methodologies to protect against tampering attacks in cyberphysical microfluidic biochips (CPMBs). It also provides a general overview of this nascent area of research, which will prove to be a vital resource for practitioners in the field.This book shows how hardware-based countermeasures and design innovations can be a simple and effective last line of defense, demonstrating that it is no longer justifiable to ignore security and trust in the design phase of biochips.

Jack Tang is a consultant at New York University in Brooklyn, New York.

Mohamed Ibrahim is a SoC Design Engineer at Intel Corporation in Hillsboro, Oregon.

Krish Chakrabarty is the William H. Younger Distinguished Professor of Engineering in the Department of Electrical and Computer Engineering, at Duke University in Durham, NC.  He has been at Duke University since 1998. His current research is focused on: testing and design-for-testability of integrated circuits (especially 3D and multicore chips); digital microfluidics, biochips, and cyberphysical systems; optimization of digital print and production system infrastructure. His research projects in the recent past have also included chip cooling using digital microfluidics, wireless sensor networks, and real-time embedded systems. Research support is provided by the National Science Foundation, the Semiconductor Research Corporation, Cisco Systems, HP Labs, Huawei Technologies, and Intel Corporation through Intel Lab's Academic Research Office. Other sponsors in the past have included National Institutes of Health , DARPA and the Office of Naval Research.

Prof. Chakrabarty received the B. Tech. degree from the Indian Institute of Technology, Kharagpur, India in 1990, and the M.S.E. and Ph.D. degrees from the University of Michigan, Ann Arbor in 1992 and 1995, respectively, all in Computer Science and Engineering . During 1990-95, he was a research assistant at the Advanced Computer Architecture Laboratory of the Department of Electrical Engineering and Computer Science, University of Michigan. During 1995-1998, he was an Assistant Professor of Electrical and Computer Engineering at Boston University.

Prof. Chakrabarty is a Fellow of ACM, a Fellow of IEEE, and a Golden Core Member of the IEEE Computer Society. He is also an Invitational Fellow of the Japan Society for the Promotion of Science (JSPS), 2009. He is a recipient of the IEEE Computer Society Meritorious Service Award. Prof. Chakrabarty was a Chair Professor in the School of Software in Tsinghua University, Beijing, China (2009-2013), and a Visiting Chair Professor in Computer Science and Information Engineering at National Cheng Kung University in Taiwan (2012-2013). He has held Visiting Professor positions at University of Tokyo (Japan), Nara Institute of Science and Technology (Japan), and University of Potsdam (Germany), and a Guest Professor position at University of Bremen (Germany). Ramesh Karri is a Professor of Electrical and Computer Engineering at Tandon School of Engineering, New York University. He has a Ph.D. in Computer Science and Engineering, from the University of California at San Diego. His research and education activities span hardware cybersecurity including trustworthy ICs, processors and cyberphysical systems; security-aware computer aided design, test, verification, validation and reliability; nano meets security; metrics; benchmarks; hardware cybersecurity competitions; additive manufacturing security.
Show all