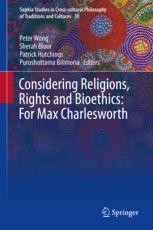 This volume engages in conversation with the thinking and work of Max Charlesworth as well as the many questions, tasks and challenges in academic and public life that he posed. It addresses philosophical, religious and cultural issues, ranging from bioethics to Australian Songlines, and from consultation in a liberal society to intentionality. The volume honours Max Charlesworth, a renowned and celebrated Australian public intellectual, who founded the journal Sophia, and trained a number of the present heirs to both Sophia and academic disciplines as they were further developed and enhanced in Australia: Indigenous Australian studies, philosophy of religion, the study of the tension between tradition and modernity, phenomenology and existentialism, hermeneutics, feminist philosophy, and philosophy of science that is responsive to environmental issues.

Peter Wong is a graduate of the Philosophy Department at the University of Hawaii at Mānoa with a focus on Chinese philosophy, especially Confucian thought. He is a Books Reviews Editor and an Editorial Executive of the journal Sophia. An itinerant academic, he has taught at University of Melbourne and Deakin University, and occasionally shows up at the odd philosophy conference. He now works as a researcher at the China Studies Research Centre, Latrobe University, Melbourne.

Sherah Bloor is currently a graduate student of the Committee of the Study of Religion at Harvard University and a member of the Melbourne School of Continental Philosophy. She has worked as the Editorial Manager of the Sophia Journal (Springer journal in Philosophy and Tradition) since 2008. That year she also graduated from the University of Melbourne with a BA Hons in Philosophy and Social Theory and later received an MA in philosophy from La Trobe University.

Purushottama Bilimoria Ph.D., studied Philosophy, Sanskrit and Indian Religions in India, Australia and Oxford. He is one of the Editors-in-Chief of Sophia (Springer journal in Philosophy and Tradition), and of the Journal in Philosophy and Religion, and International Journal of Dharma Studies (Springer). He teaches and researches in United States (University of California, Berkeley and Graduate Theological College), holds honorary fellowships with University of Melbourne and Deakin University, Australia, and the Indian Council for Philosophical Research in India; as he travels and dreams, he happens also to publish relentlessly on Philosophies of Religion, Indian Philosophy and Ethics, Gandhi and global civil rights, Muslim personal law and justice, emotions and aesthetics in cross-cultural thought.