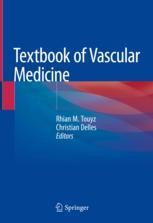 This textbook focuses on the vascular biology and physiology that underlie vascular disorders in clinical medicine. Vascular biomedicine is a rapidly growing field as new molecular mechanisms of vascular health and disease are unraveled. Many of the major cardiovascular diseases including coronary artery disease, heart failure, stroke and vascular dementia are  diseases of the vasculature. In addition vascular injury underpins conditions like kidney failure and cardiovascular complications of diabetes. This field is truly multidisciplinary involving scientists in many domains such as molecular and vascular biology, cardiovascular physiology and pharmacology and immunology and inflammation. Clinically, specialists across multiple disciplines are involved in the management of patients with vascular disorders, including cardiologists, nephrologists, endocrinologists, neurologists and vascular surgeons.

This book covers a wide range of topics and provides  an overview of the discipline of vascular biomedicine without aiming at in-depth reviews, but rather offering up-to-date knowledge  organized  in concise and structured chapters, with key points and pertinent references.  The structure of the content provides an integrative and translational approach from basic science (e.g. stem cells) to clinical medicine (e.g. cardiovascular disease).

The content of this book is targeted to those who are new in the field of vascular biology and vascular medicine and is ideal for medical students, graduate and postgraduate students, clinical fellows  and academic clinicians with an interest in the vascular biology and physiology of cardiovascular disease and related pathologies.

Professor Rhian M. Touyz, MBBCh, MSc(Med), PhD, FRCP, FRSE, FAHA, FCAHS, FESC, FMedSci. is Director of the Institute of Cardiovascular & Medical Sciences  (ICAMS) and British Heart Foundation (BHF) Chair of Cardiovascular Medicine, University of Glasgow. She also directs the BHF Centre of Research Excellence in Vascular Science and Medicine, ICAMS. She is a clinician-scientist focusing on vascular biology of hypertension, and is honorary consultant in the Blood Pressure Unit at the Queen Elizabeth University Hospital. She was the Canada Research Chair in Hypertension at the Kidney Research Centre, Ottawa Hospital Research Institute, Univ of Ottawa, Canada until 2011 when she moved to Glasgow. Dr Touyz received her BSc(Hons)(1980), MBBCh(1984), MSc(1986) and PhD(1992) from the University of Witwatersrand, South Africa. She completed a post-doctoral fellowship at the Clinical Research Institute in Montreal. She has received numerous awards, including the Dahl Award and the Harriet Dustan Research Award (American Heart Association (AHA)), Robert M. Berne Distinguished Award (American Physiological Society), RD Wright Award (BP Research Council, Australia), Irvine Page Award (American Society of Hypertension) and the Joan Mott Award (Physiology Society). Prof Touyz co-chaired the Canadian Hypertension Education Program for clinical guidelines and is a member of the Committee for Practice Guidelines of the European Society of Cardiology. She was President of the Canadian Hypertension Society, Chair of the High Blood Pressure Research Council (AHA), and President of the International Society of Hypertension. She is the President of the European Council for Cardiovascular Research. She is Editor-in-Chief of Clinical Science, Deputy Editor of Hypertension, and Associate Editor of Pharmacological Reviews.

Professor Christian Delles, MD, FRACP, FAHA, FBHS, is Professor at the Institute for Cardiovascular and Medical Sciences (ICAMS), University of Glasgow. He is the Deputy-Director of the British Heart Foundation Centre of Research Excellence in Vascular Science and Medicine, ICAMS, University of Glasgow and he is a Consultant Physician at the Queen Elizabeth University Hospital. After graduating from the University of Freiburg, Germany, and working for his MD Thesis at the University of Innsbruck, Austria, he trained in internal medicine and nephrology at the Department of Nephrology, University of Erlangen-Nürnberg, Germany. In 2003 he was awarded a fellowship by the Deutsche Forschungsgemeinschaft for studies into reactive oxygen species in hypertension in Prof. Anna Dominiczak's group in Glasgow. He has been a lead investigator in numerous large network research projects funded by the European Commission.