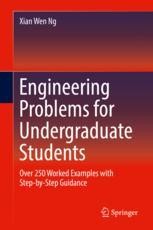 Over 250 Worked Examples with Step-by-Step Guidance

This textbook supplement deconstructs some of the most commonly-encountered and challenging problems arising within engineering domains such as thermodynamics, separation processes, chemical kinetics, fluid dynamics, and engineering mathematics that are foundational to most engineering programs, as well as many courses in STEM disciplines. The book is organized into a series of 250 problems and worked solutions, with problems written in a format typical of exam questions. The book provides students ample practice in solving problems and sharpening their skill applying abstract theoretical concepts to solving exam problems. The presentation of detailed step-by-step explanations for each problem from start to finish in this book helps students follow the train of thought toward arriving at the final numerical solutions to the problems.

Xian Wen Ng graduated with First-Class Honors from the University of Cambridge, UK with a Masters Degree in Chemical Engineering and Bachelor of Arts in 2011 and was subsequently conferred a Master of Arts in 2014. She was ranked second in her graduating class, and was the recipient of a series of college scholarships including the Samuel Taylor Scholarship, Thomas Ireland Scholarship and British Petroleum Prize in Chemical Engineering, for top performance in consecutive years of academic examinations. Ng was also one of two students from Cambridge University selected for the Cambridge-Massachusetts Institute of Technology (MIT) exchange program in Chemical Engineering, which she completed with Honors with a cumulative GPA of 4.8 (5.0). During her time at MIT, she was also a part-time tutor for junior classes in engineering, and pursued other disciplines including economics, real estate development and finance at MIT as well as the John F. Kennedy School of Government at Harvard University. Upon graduation, Ng was elected by her college Fellowship to the Title of Scholar, as a mark of her academic distinction.

Since graduation, Xian Wen Ng has been keenly involved in teaching across various academic levels, doing so both in schools as well as with smaller groups as a private tutor. Xian Wen Ng’s topics of specialization range from secondary level Mathematics, Physics, and Chemistry, up to tertiary-level Mathematics and Engineering subjects.