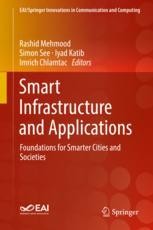 Foundations for Smarter Cities and Societies

This book provides a multidisciplinary view of smart infrastructure through a range of diverse introductory and advanced topics.  The book features an array of subjects that include: smart cities and infrastructure, e-healthcare, emergency and disaster management, Internet of Vehicles, supply chain management, eGovernance, and high performance computing. The book is divided into five parts: Smart Transportation, Smart Healthcare, Miscellaneous Applications, Big Data and High Performance Computing, and Internet of Things (IoT). Contributions are from academics, researchers, and industry professionals around the world.

Rashid Mehmood: Rashid Mehmood is the Research Professor of Big Data Systems and the Director of Research, Training, and Consultancy at the High Performance Computing Centre, King Abdulaziz University, Saudi Arabia. He has gained qualifications and academic work experience from universities in the UK including Cambridge and Oxford. Rashid has over 20 years of research experience in computational modelling and simulation systems coupled with his expertise in high performance computing. His broad research aim is to develop multi-disciplinary science and technology to enable a better quality of life and Smart Economy with a focus on real-time intelligence and dynamic system management. He has published over 150 research papers including 5 edited books. He has organised and chaired international conferences and workshops in his areas of expertise including EuropeComm 2009 and Nets4Cars 2010 - 2013. He has led and contributed to academia-industry collaborative projects funded by EPSRC, EU, UK regional funds, and Technology Strategy Board UK with the value over £50 million. He is a founding member of the Future Cities and Community Resilience (FCCR) Network. He is a member of ACM, OSA, Senior Member IEEE and former Vice-Chairman of IET Wales SW Network.

Simon See: Prof. Simon See is currently the Solution Architecture and Engineering Director and Chief Solution Architect for Nvidia AI Technology Center. He is also a Professor and Chief Scientific Computing Officer in Shanghai Jiao Tong University. Prof. See is also the Chief Scientific Computing Advisor for BGI (China) and has a position in NanyangTechnological University (Singapore) and King-Mong Kung University of Technology (Thailand). Prof See is currently involved in a number of smart city projects, especially in Singapore and China. His research interests are in the area of High Performance Computing, Big Data, Artificial Intelligence, machine learning, computational science, Applied Mathematics, and simulation methodology. Prof. See is also leading some of the AI initiatives in Asia Pacific. He has published over 200 papers in these areas and has won various awards. Prof. See is also a member of SIAM, IEEE, and IET. He also a committee member of more than 50 conferences. Prof. See graduated from University of Salford (UK) with a Ph.D. in electrical engineering and numerical analysis in 1993. Prior to joining NVIDIA, Prof. See worked for SGI, DSO National Lab. of Singapore, IBM, International Simulation Ltd (UK), Sun Microsystems, and Oracle. He is also providing consultancy to a number of national research and supercomputing centers.

Iyad Katib: Iyad Katib is an Associate Professor with the Computer Science Department and the current Vice Dean and the College Council Secretary of the Faculty of Computing and Information Technology (FCIT) in King Abdulaziz University (KAU). He is also the Director of KAU High Performance Computing Center. Iyad received his Ph.D. and MS degrees in Computer Science from University of Missouri-Kansas City in 2011 and 2004, respectively. He received his BS degree in Statistics/Computer Science from King Abdul Aziz University in 1999. His current research interest is on Computer Networking and High Performance Computing.

Imrich Chlamtac: Dr. Chlamtac is the President of EAI, the European Alliance for Innovation, where he pioneered EAI as a global initiative for promoting growth of ICT based economy and digital society. Based on community cooperation principles, EAI supports research and innovation with events, publications, and its innovation platform through the cooperation of over hundred and fifty thousand subscribers worldwide. Dr. Chlamtac is also the Founding President of CREATE-NET and Bruno Kessler Professor at the University of Trento, top ranked ICT institutions in Italy.

Prior to coming to Europe Dr. Chlamtac served as Associate Provost for Research and Distinguished Chair in Telecommunications at the University of Texas in Dallas, the number one USA ranked “young university” in the Times of Higher Education ranking 2017. Prior to that he was a Professor at Boston University, University of Massachusetts and Technion.

Dr. Chlamtac holds multiple academic and honorary appointments including the University of Trento, the Tel Aviv University, the Beijing University of Posts and Telecommunications, and the Budapest University of Technology and Economics.

Dr. Chlamtac scientific recognitions include IEEE and ACM Fellowship, the ACM Award for Outstanding Contributions to Research on Mobility, the IEEE Award for Outstanding Technical Contributions to Wireless Personal Communications, New Talents in Simulation of SCS, Fulbright Scholarship, IEEE Distinguished Lecturer. He was listed in ISIHighlyCited.Com among the 250 most cited Computer Science researchers worldwide. Dr. Chlamtac iis also included in the list of Notable People from the University of Minnesota where he received his PhD and holds an Honorary Citizenship in Slovakia where he was born.

As part of his contribution to the research community, Dr. Chlamtac founded the ACM SigMobile, serves as Editor in Chief of the Springer WINET and MONET journals, established ACM Mobicom and other leading conferences.  As the original architect and current President of EAI.

Dr. Chlamtac is a co-founder and past President of CONSIP Ltd, the first network emulator company, and of BCN Ltd, currently KFKI Ltd one of the largest system integrator companies in Central Europe.