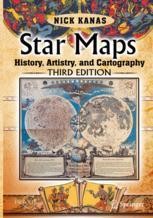 Explore the beauty and awe of the heavens through the rich celestial prints and star atlases offered in this third edition book. The author traces the development of celestial cartography from ancient to modern times, describes the relationships between different star maps and atlases, and relates these notions to our changing ideas about humanity’s place in the universe. Also covered in this book are more contemporary cosmological ideas, constellation representations, and cartographic advances.

The text is enriched with 226 images (141 in color) from actual, antiquarian celestial books and atlases, each one with an explanation of unique astronomical and cartographic features. This never-before-available hardcover edition includes two new chapters on pictorial style maps and celestial images in art, as well over 50 new images. Additionally, the color plates are now incorporated directly into the text, providing readers with a vibrant, immersive look into the history of star maps.

Dr. Nick Kanas is an Emeritus Professor of Psychiatry at the University of California, San Francisco, where he directed the group therapy training program and wrote a book entitled Group Therapy for Schizophrenic Patients. For over 20 years, he conducted research in group therapy, and for over 15 years after that he was the Principal Investigator of NASA-funded psychological research on astronauts and cosmonauts. In 1999, Dr. Kanas received the Aerospace Medical Association Raymond F. Longacre Award for Outstanding Accomplishment in the Psychological and Psychiatric Aspects of Aerospace Medicine. In 2008, he received the International Academy of Astronautics Life Science Award. He has over 230 scientific publications.

Dr. Kanas is the coauthor of Space Psychology and Psychiatry (now in its 2nd edition), which won the 2004 International Academy of Astronautics Life Science Book Award. In 2015, he authored Humans in Space: The Psychological Hurdles, which won the 2016 International Academy of Astronautics Life Science Book Award.
Dr. Kanas has been an amateur astronomer for over 50 years. He has collected antiquarian celestial maps for over 30 years and has given talks on the history of celestial cartography to amateur and professional groups.  He is the author of Star Maps: History, Artistry, and Cartography (now in its 2nd edition), and Solar System Maps: From Antiquity to the Space Age. An avid science fiction reader, Dr. Kanas has given talks and participated on panels at numerous World Science Fiction Conventions. He has published articles for Analog Science Fiction and Fact magazine and won the Analog AnLab 2015 readers’ poll award for Best Fact Article of the year. He has published three science fiction novels for the Springer Science and Fiction series: The New Martians, The Protos Mandate, and The Caloris Network. Except for his group therapy book, all of his books are published by Springer.

“This is a work that contains many items of relevance to astronomers, who will find the illustrations of atlases and charts of particular interest, albeit with many failings in the text and descriptions. It is probably of more interest to collectors of antiquarian maps (and even they will have some problems using it).” (Storm Dunlop, The Observatory, Vol. 140 (1278), October, 2020)
“You get a real bang for your buck with Kanas’s tome. Now in its third edition, the book is well written, thoroughly researched, and beautifully illustrated with 226 images (141 in color) from actual antiquarian books and atlases. … Star Maps should greatly appeal to amateur astronomers, map collectors, and historians of astronomy and art.” (Peter Tyson, Sky & Telescope, August, 2020)
“Star Maps’s comprehensiveness, for all its jackdaw tendencies, is on balance a virtue. Like a curiosity shop packed to the rafters, it almost certainly has what you’re looking for tucked away somewhere.” (Jonathan Crowe, Calafia Journal, Issue 01, 2020)
“Star Maps excels in the clarity of its writing, is highly accurate throughout, and will serve as the authoritative work on its subject for a very long time to come. This reviewer has a growing collection of astronomy books of well over a thousand in number now, and would include Star Maps as one among a small selection of books from his library he would say deserves to be read by every person interested in the history of astronomy.” (Alan Agrawal, Diablo Moonwatch, January, 2020)