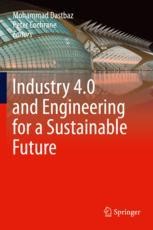 Industry 4.0 and Engineering for a Sustainable Future

About this book
This unique volume considers the emergence of “Industry 4.0” (i4.0) and the many ways the multifaceted field of Engineering is transforming our ideas and our options around sustainability.  It points to emerging technological advances that are facilitating industrial process improvements to artificial intelligence’s promise to help us live “smartly” and manage energy demand.  Engineering for a sustainable future is an exploding area of research.  This book provides coverage of  key case studies from industrial partners such as Ericsson, British Telecom (BT), BMW, Matrixx and research from different UK and international institutions.
Show all
About the authors

Prof. Mohammad Dastbaz is the Deputy Vice Chancellor at University of Suffolk. Professor Dastbaz’s research work over recent years has been focused on the use and impact of emerging technologies in society, particularly learning, training and the development of “eGovernment.” Dr. Dastbaz has led EU and UK based funded research projects and has been the Symposium Chair of Multimedia Systems in IEEE’s Information Visualisation (IV) conference since 2002. He has over 50 refereed publications, including numerous journal paper articles, conference papers, book chapters and books on e-learning, eGovernment and the design and development of Multimedia Systems. Professor Dastbaz is a Fellow of the British Computer Society and UK’s Higher Education Academy as well as the professional member of ACM and IEEE’s computer society.

Prof. Peter Cochrane OBE - is an internationally sought after guru who invests his time and money as an agent of change. Renowned for his out of the box thinking, he is an advisor and consultant to companies and governments, the author of blogs, articles and books on technology, business and managing rapid change. With over 40 years of technology and operational experience, Peter has been involved in the creation and transformation of corporations. His BT career saw him progress to CTO with teams engaged in optical fiber, fixed and mobile networks, artificial life and healthcare, through to war gaming, eCommerce, and business modelling. Peter has also spent time as an educator and was appointed Professor for the Public Understanding of Science & Technology @ Bristol (1998).

Peter has also been employed in the defence, logistics, travel, retail, energy, healthcare, transport, pharma, and consulting sectors as an advisor, board member, and manager with responsibilities for strategy and operations with budget responsibilities up to £1bn.  As an investor and entrepreneur Peter has also engaged in the founding of new companies, investment and the management of growth leading to market success. He was appointed as the UK’s first Prof for the Public Understanding of Science & Technology @ Bristol in 1998.   A graduate of Nottingham Trent and Essex Universities, Peter has received notable recognition with the Queen's Award for Innovation & Export in 1990 and Honorary Doctorates from Essex, Robert Gordon, Stafford, Nottingham Trent and Brunel Universities. He was awarded an OBE in 1999 for contributions to international communications.