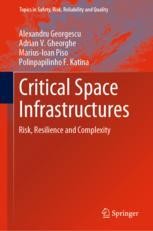 This book introduces readers to the topical area of CSI: critical space infrastructure, which is defined as an emerging domain of systems-of-systems encompassing hardware, workforce, environment, facilities, business and organizational entities. Further, it includes unmanned air systems, satellites, rockets, space probes, and orbital stations, and involves multi-directional interactions essential for maintenance of vital societal functions (i.e., health, safety, economic and social well-being), the loss or disruption of which would have significant impact on virtually any nation. The topics covered include the main elements of CSI, CSI taxonomy, effects of CSI on other infrastructure systems, establishing quantitative and qualitative parameters, global and national effects of CSI failure, cascading disruptive phenomena, chilling effects in various fields, CSI protection, deliberate threats to space systems (e.g., electromagnetic pulse attacks), space governance, and a path forward for CSI research. Modern society is highly dependent on the continuous operation of critical infrastructure systems for the supply of crucial goods and services including, among others, the power supply, drinking water supply, and transportation systems; yet space systems – which are critical enablers for several commercial, scientific and military applications – are rarely discussed. This book addresses this gap.

​Alexandru Georgescu serves as a Researcher for the Romanian Association of Space Technology and Industry, from which position he is involved in research projects funded by, among others, the European Space Agency. He is also a Research Assistant with the Department of Cybersecurity and Critical Infrastructure Protection of the National Institute for Research and Development in Informatics (ICI Bucharest). He is also affiliated with the EURISC Foundation, the European Centre for Excellence for Blockchain, Eurodefense Romania and the Atlantic Treaty Association’s Romanian chapter. He holds a BA in Economics and an MA in Geopolitics from Bucharest University of Economic Studies (Bucharest, Romania). Having developed as a security governance professional, he deepened his knowledge of Critical Infrastructure Protection and now holds a PhD in Industrial Engineering from the Politehnica University of Bucharest (Bucharest, Romania). Dr. Georgescu has published widely, both in peer-reviewed journals and conferences proceedings. He has significant international experience in places such as China, having been a Visiting Fellow of the Shanghai Institutes for International Studies. He is also present as a security analyst in the popular media, writing in the press and making media appearances, along with participations in conferences and fora.
Adrian V. Gheorghe currently serves as Professor of Engineering Management and Systems Engineering and is the Batten Endowed Chair on System of Systems Engineering with the Department of Engineering Management and Systems Engineering at Old Dominion University (Norfolk, Virginia, USA). He holds a M.Sc. in Electrical Engineering from the Faculty of Power Engineering, Bucharest Polytechnic Institute (Bucharest, Romania), an MBA from Academy of Economic Studies (Bucharest, Romania), and a M.Sc. Engineering-Economics, Bucharest Polytechnic Institute, (Bucharest, Romania) and a Ph.D. in Systems Science/Systems Engineering from City University (London, U.K.) His profile includes editorship for several international scientific journals and scientific board memberships. He has published several books, including ‘Emergency Planning Knowledge’ (VdF Verlag, 1996), ‘Critical infrastructures at risk: Securing the European electric power system’ (Springer, 2006), and ‘Critical infrastructures: Risk and vulnerability assessment in transportation of dangerous goods - Transportation by road and rail’ (Springer, 2016).
Marius-Ioan Piso is a Romanian scientist serving as the head of the Romanian Space Agency (ROSA). Since 1998 he is Research Professor in the Institute of Space Science Bucharest. In 1994 he undertook studies in Doctor in Physics from the “Alexandru Ioan Cuza” University of Iasi, Iași, Romania. He is a graduate of the “Babes-Bolyai” University of Cluj with a degree in Physics. He is also a 1999 graduate of the National Defense College in Bucharest, Romania. Since 1990, he worked for the establishment of the Romanian Space Agency and became its first executive director in 1995 and appointed President and Chief Executive officer in 2004. He did early work in gravitational radiation and space-time physics. He also performed experimental work in motion measurement and developed a class of inertial sensors and actuators with nanomagnetic fluids, authoring more than 20 patents and 40 papers. Since the late 1990’s he involved in studies and decision making for utilizing space technology in disaster management and planetary defense. For more than two decades, Marius-Ioan Piso has acted as a high-level representative for international bodies including: United Nations Committee of the Peaceful Uses of Outer Space (UNCOPUOS), North Atlantic Treaty Organization (NATO) and national delegate for the European Space Agency (ESA). He is a member of several national and international research bodies on space research and development and security research including the International Academy of Astronautics (IAA) serving as an elected trustee and chairman of section. He established, within the IAA, a study group on “Space Systems as Critical Infrastructures” in 2006 and organized a series of conferences on this topics and studies on planetary defense. He has received several hours including ‘Doctor Honoris Causa’ and knighthoods. An asteroid discovered in 1981 bears his name.
Polinpapilinho F. Katina serves as an Assistant Professor of Advanced Manufacturing Management in the Department of Informatics and Engineering Systems at University of South Carolina Upstate, Spartanburg, South Carolina. He previously served as a Postdoctoral Researcher at the National Centers for System of Systems Engineering (NCSOSE) at Old Dominion University, Norfolk, Virginia; Adjunct Assistant Professor in the Department of Engineering Management and Systems Engineering at Old Dominion University, Norfolk, Virginia; and Adjunct Assistant Professor in the Department of Engineering and Technology, Embry–Riddle Aeronautical University – the Worldwide Campus. He holds a BSc in Engineering Technology, a MEng in Systems Engineering and a PhD in Engineering Management and Systems Engineering from the Old Dominion University and received additional training from among others, Politecnico di Milano, Milan, Italy. He is a founding board member of the International Society for Systems Pathology, Claremont, California. Dr. Katina received a 2018 Publons Peer Review Award (Top 1% in Field: Multidisciplinary). His profile includes more than 80 peer-reviewed journal articles, conference (papers) proceedings and books. His research interests include complex system governance, critical infrastructure systems, decision analysis, engineering management, manufacturing systems, system-of-systems, system pathology, systems engineering and systems science.