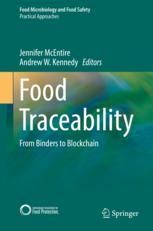 From Binders to Blockchain

This book provides a picture of food traceability for all aspects of the food system, recognizing the unique differences, challenges, and “states of the industry” in different types of food products, as well as the different pressures and opportunities at different points in the supply chain and the research that has already been done. It also provides some historical context, along with the types of solutions available to the food industry, and the benefits associated with better recordkeeping that go beyond the public good and impact the bottom line. Whenever a food related outbreak occurs, traceability is called into question. When lives are at stake, it is critical that the root of the problem is quickly identified to prevent further illness. Once the problem is found, it’s just as important to contain it quickly. Too often, recalls expand because implicated product is not readily accounted for.   Mention of traceability stirs fear for many in the food industry for several reasons: within a company, it’s not clear if responsibility for traceability lies with food safety professionals involved in recalls, supply chain professionals who understand product movement, IT professionals who build and maintain the recordkeeping systems, or regulatory professionals who need to respond to government requests for information. There is also a sense that traceability is someone else’s problem. Few firms admit that they are the weak link and instead tout how quickly they can perform mock recalls. But traceability is about more than just recalls. It is about the connectivity of the supply chain as a product and its constituents travel from the farm to the consumer. Because it is a systems issue, there is a sense that the investment by a single firm will be meaningless if supply chain partners don’t have comparable abilities.  This book will address both these surrounding issues and solutions.

Jennifer McEntire, PhD, is Vice President of Food Safety and Technology at United Fresh Produce Association. A food microbiologist by background, she has always worked in the Washington, DC area, bringing the scientific perspective to food safety regulatory issues. While serving as the Director of Science & Technology Projects at the Institute of Food Technologists, McEntire led multiple traceability-related projects for the FDA and others, including conducting traceability pilots in support of the Food Safety Modernization Act and launching the Traceability Improvement Initiative. McEntire earned a PhD from Rutgers University as a USDA National Needs Fellow in Food Safety and received a Bachelor of Science with Distinction, magna cum laude, in food science from the University of Delaware. She serves as an advisory board member of the Global Food Traceability Center, on the technical committee of the Center for Produce Safety, and is on the executive committee of the Food Safety Preventive Controls Alliance.

Andrew Kennedy is a leading voice in the world of food traceability, sustainability and food safety.  He has developed supplier transparency and traceability solutions for leading restaurant operators, retailers and food companies using cloud and Blockchain technology. As the Interim Director of the Global Food Traceability Center at IFT, he is a leader of industry-wide initiatives to implement food traceability in seafood and produce.

Mr. Kennedy serves as a board member and chair of the Science and Technology committee of the Produce Marketing Association; has co-chaired several national and global food traceability technology standards initiatives; and led FoodLogiQ’s successful participation in the FDA Food Traceability Pilot.  He has worked with food producers on four continents and across the United States.

Prior to FoodLogiQ, Mr. Kennedy served in leadership roles in a medical device manufacturing company and worked as a technology consultant with Accenture and Clarkston Consulting. He lives in Durham, North Carolina and holds an MBA from Duke University and a BA in Economics from Lafayette College.