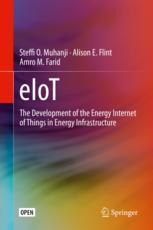 The Development of the Energy Internet of Things in Energy Infrastructure

This open access book explores the collision between the sustainable energy transition and the Internet of Things (IoT). In that regard, this book’s arrival is timely. Not only is the Internet of Things for energy applications, herein called the energy Internet of Things (eIoT), rapidly developing but also the transition towards sustainable energy to abate global climate is very much at the forefront of public discourse. It is within the context of these two dynamic thrusts, digitization and global climate change, that the energy industry sees itself undergoing significant change in how it is operated and managed. This book recognizes that they impose five fundamental energy management change drivers: 1.) the growing demand for electricity, 2.) the emergence of renewable energy resources, 3.) the emergence of electrified transportation, 4.) the deregulation of electric power markets, 5.) and innovations in smart grid technology. Together, they challenge many of the assumptions upon which the electric grid was first built.

The goal of this book is to provide a single integrated picture of how eIoT can come to transform our energy infrastructure. This book links the energy management change drivers mentioned above to the need for a technical energy management solution. It, then, describes how eIoT meets many of the criteria required for such a technical solution. In that regard, the book stresses the ability of eIoT to add sensing, decision-making, and actuation capabilities to millions or perhaps even billions of interacting “smart" devices. With such a large scale transformation composed of so many independent actions, the book also organizes the discussion into a single multi-layer energy management control loop structure. Consequently, much attention is given to not just network-enabled physical devices but also communication networks, distributed control & decision making, and finally technical architectures and standards. Having gone into the detail of these many simultaneously developing technologies, the book returns to how these technologies when integrated form new applications for transactive energy. In that regard, it highlights several eIoT-enabled energy management use cases that fundamentally change the relationship between end users, utilities, and grid operators. Consequently, the book discusses some of the emerging applications for utilities, industry, commerce, and residences. The book concludes that these eIoT applications will transform today’s grid into one that is much more responsive, dynamic, adaptive and flexible. It also concludes that this transformation will bring about new challenges and opportunities for the cyber-physical-economic performance of the grid and the business models of its increasingly growing number of participants and stakeholders.

Steffi O. Muhanji graduated with a Bachelor of Arts in Physics and a Computer Science minor from Vassar College in 2014. She continued on to complete her Bachelor of Engineering degree with a focus on energy systems at the Thayer School of Engineering in June 2016. In Fall 2015, Steffi joined the LIINES as an undergraduate researcher and has since decided to continue as a Ph.D. candidate in engineering. Her research interests are in renewable energy integration and electric microgrids.

Alison E. Flint received her Bachelor of Arts in Economics from Dartmouth College in 2015. She joined the lab from the Fall of 2017 to the Spring of 2018 working on “The Development of the Energy Internet of Things in Energy Infrastructure.” She continues her Master of Sc. studies at the University of Texas at Austin in Electrical and Computer Engineering. Her research interests include energy markets, eIoT, renewable energy integration, microgrids, distributed energy resources, and smart cities.


He received his Sc. B. in 2000 and his Sc. M. 2002 from the MIT Mechanical Engineering Department. He went onto complete his Ph.D. degree at the Institute for Manufacturing within the University of Cambridge (UK) Engineering Department in 2007. He has varied industrial experiences from the automotive, semiconductor, defense, chemical, and manufacturing sectors. In 2010, he began his academic career as a visiting scholar at the MIT Technology Development Program.

He is also a Research Affiliate at the MIT Mechanical Engineering Department and the U. of Massachusetts Transportation Research Center. He has made active contributions to the MIT-Masdar Institute Collaborative Initiative, the MIT Future of the Electricity Grid Study, and the IEEE Vision for Smart Grid Controls. He is currently the Chair of Council of Engineering Systems Universities (CESUN). He is a senior member of the IEEE and holds leadership positions in the IEEE Control Systems Society (CSS) Technical Committees on Smart Grids and Smart Cities, the IEEE Systems, Man & Cybernetics (SMC) Technical Committee on Intelligent Industrial Systems, and the IEEE Smart Cities Initiative.