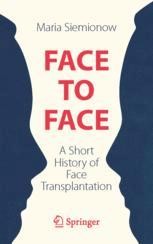 A Short History of Face Transplantation

This book creatively communicates the human and professional sides of the journey to the first ever near total face transplant, the response to this milestone in the medical community, and the effect it has had on the individuals involved. It focuses on the evolution of Professor Maria Siemionow as a microsurgeon and the processes by which she sensationally overcame the challenges her team encountered including the successful manipulation of the immune system to avoid rejection of the face tissue by the recipient.

Face to Face: A Short History of Face Transplantation combines the medical and human elements of the development of face transplant surgery. It is not only targeted at the surgical professional and trainee, but also the general public who wish to read about the journey of how a significant medical advancement was made. It is also great reading to inspire girls of an age where they are thinking about career paths to believe they can do something extraordinary and could persuade some to pursue a career in an STEM subject.

Pioneering surgeon Maria Siemionow, MD, PhD, grew up in Poznan, Poland. She was awarded her medical degree by Poznan University of Medical Sciences in 1974, after which she completed her residency in orthopedics, and then earned a PhD in microsurgery. In 1985, she completed a hand surgery fellowship at the Christine Kleinert Institute for Hand and Microsurgery in Louisville, Kentucky.

She moved to Chicago in 2014 to become Professor of Orthopedics and Director of Microsurgery Research at the University of Illinois at Chicago.

Doctor Siemionow has more than 330 scientific publications, among which are ten plastic surgery textbooks and three popular science books. She has contributed to 120 published book chapters.  Dr.Siemionow has been featured in international media including CNN, BBC World Service, Associate Press; NPR’s All Things Considered, New York Times, Chicago Tribune, National Geographic and Forbes. From Fox News, CNN and the BBC to the New York Times.

Her numerous awards include the Polish Order of Merit (2009), the Commander’s Cross Polonia Restituta Award (2009), the Outstanding Achievement in Clinical Research Award from the Plastic Surgery Educational Foundation (2010) the American Society of Plastic Surgeons’ Board of Trustees Special Achievement Award (2011), the Casimir Funk National Science Award (2013), the Heritage Award from Polish American Congress (2016), the Business Women of the Year award by Polish Foundation (2017).

“Those interested in the background story leading up to and including the revolutionary breakthroughs in facial transplantation surgery will find this historical account intriguing. … Both those in the field of medicine and the public at large who lack substantial medical knowledge will find this book of interest, particularly when considering the life‐altering effect that the transplantation of the face can have.” (Jeffrey S. Rosenthal, Doody's Book Reviews, September 13, 2019)