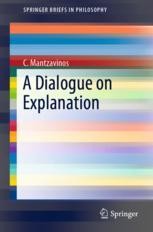 A Dialogue on Explanation

This book introduces a panorama of the philosophical theory of explanation. Written as a philosophical dialogue between two interlocutors, Philip and a student, it presents a defense of the position of explanatory pluralism.

The fictional dialogue takes place on Cape Sounion, near Athens, where the two interlocutors are enjoying the view over the Aegean Sea. An initial exchange of arguments leads to a dialogue unfolding the development of the contemporary philosophical theory of explanation. The second part of the dialogue is devoted to an exchange of arguments on explanatory pluralism as a novel approach to the philosophical theory of explanation. The two also discuss historical cases as well as the ways of achieving explanatory progress in science.

We are all philosophers and we develop our own philosophy by exchanging views and arguments. The dialogue form is and should remain the principal form of philosophizing, since ideas do not merely exist – they develop. This is certainly the case in real-world philosophical interaction, and as this book aptly demonstrates, it can also be the case in written philosophical exposition.

Before his current appointment in Athens, he held the Chair of Economics and Philosophy at Witten/Herdecke University, Germany (2004–2011). He has also taught at Freiburg, Bayreuth, and was a Visiting Assistant Professor at Stanford (2000–2001). He was a Senior Research Fellow at the Max Planck Institute for Research on Collective Goods, Bonn (2001–2004) and served as a Visiting Scholar at Harvard (twice), at Maison des Sciences de l’Homme, Paris (twice) and at the University Center for Human Values at Princeton. He holds two PhDs, in Economics and in Philosophy, both from the University of Tübingen.

“Mantzavinos’s book on explanation is a useful summary of the philosophical conceptions of explanations, which put forward a new account as well. His examples are short and illuminating, usually taken from economy and medicine and thus not just from physics. Students and researchers could read and discuss this book in classrooms. … Mantzavinos did a great job in delivering his ideas in a clear and distinct way.” (Adam Tamas Tuboly, Review of History of Philosophy of Science Books, reviewhopos.blogspot.com, May 05, 2019)