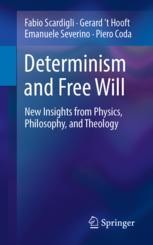 Determinism and Free Will

In this small book, theoretical physicist Gerard 't Hooft (Nobel prize 1999), philosopher Emanuele Severino (Lincei Academician), and theologian Piero Coda (Pontifical Lateran University) confront one another on a topic that lies at the roots of quantum mechanics and at the origin of Western thought: Determinism and Free Will. "God does not play dice" said Einstein, a tenacious determinist. Quantum Mechanics and its clash with General Relativity have reanimated ancient dilemmas about chance and necessity: Is Nature deterministic? Is Man free? The “free-will theorem” by Conway and Kochen, and the deterministic interpretation of quantum mechanics proposed by 't Hooft, revive such philosophical questions in modern Physics. Is Becoming real? Is the Elementary Event a product of the Case? The cyclopean clash between Heraclitus and Parmenides has entered a new episode, as evidenced by the essays in this volume.

Gerard 't Hooft, Nobel Prize in Physics 1999, has contributed to major developments in fundamental theoretical physics in the last forty years. He is known, among many things, for his research on quantum chromodynamics, for the introduction of the holographic principle in quantum gravity. And, not least, for his controversial deterministic interpretation of quantum mechanics.

Emanuele Severino, Academician of Lincei, is one of the foremost theoretical philosophers of our time. His interpretation of Becoming, which seems to challenge common sense, leads to a surprising vision of the world and of history. He is well known to the general public in Italy, both for his philosophical essays and for his interventions on the central themes of contemporary life.

Piero Coda, philosopher and theologian, was Prelate Secretary of the Pontifical Academy of Theology, and Professor of the Pontifical Lateran University. In 2014 he was nominated by Pope Francis as a member of the International Theological Commission. Currently he is Dean of the Sophia University Institute of Incisa Val d'Arno (Firenze).

Fabio Scardigli is a theoretical physicist affiliated with the Mathematics Department at the Polytechnic University of Milan and the Institute Lorentz for Theoretical Physics at Leiden University. His research focuses on the (quantum) physics of black holes and on the generalized uncertainty principle.