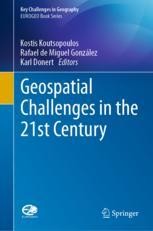 Geospatial Challenges in the 21st Century

This book focuses on 21st century geospatial technologies (GT). It highlights their broad range of capabilities and their essential role in effectively addressing and resolving critical everyday issues, such as environment, sustainability, climate change, urban planning, economy, culture and geopolitics.

Featuring chapters written by leading international scientists, it discusses the application of GT tools and demonstrates that the problems requiring such tools transcend national boundaries, cultures, political systems and scientific backgrounds on a global scale. In addition, it enhances readers’ spatial understanding of, and geographical reasoning in connection with, societal issues.

The book will appeal to scientists, teachers and students of geography, the earth sciences and related areas, as well as decision-makers interested in the application and capabilities of geospatial technologies and new, spatial methods for addressing important issues.

The Editors of this book are all part of the Presidium for the European Association of Geographers (EUROGEO), which was established in collaboration with the European Commission in 1979. Since 1987 it has had participatory status in the Council of Europe. In 2017 UN ECOSOC granted EUROGEO special consultative status for United Nations. In addition, EUROGEO created the Geocube, a tool for promoting what geography is and what geographers do.

Prof. Dr. Kostis Koutsopoulos completed his undergraduate studies in Greece and then went to the USA, where he obtained his MSc and PhD degrees as well as a postgraduate diploma at the Departments of Geography and Civil Engineering of the University of California. He began his career teaching at the University of Auburn in the United States and in 1979, at the age of 34, he was elected Professor at the National Technical University of Athens (NTUA). He served as Director of the Laboratory of Geography and Space Analysis from 1981 to 2011.

He is currently Professor of Geography at the University of Zaragoza, where he is also coordinator of the geography education program and Executive Associate Dean (for International Relations) at the Faculty of Education. He is a member of the board of the Royal Geographical Society of Spain and the Vice-President of EUROGEO (European Association of Geographers). He serves as the regional contact for Spain and is a member of the International Geographical Union Commission on Geographical Education.

He has been involved in more than 130 publications on urban geography and geographical education: books, book chapters, and journals articles alike. He co-edited the book Geography Education for Global Understanding, published by Springer, and the book Innovative Learning Geography in Europe, published by Cambridge Scholars Publishing. He is a Member of the Editorial Board of International Research in Geographical and Environmental Education and Director of several research funded projects, including Digital Atlas for School Education. In addition, he is a Member of the General Assembly of Partners, III United Nations Conference on Housing and Sustainable Urban Development. Representative of EUROGEO at United Nations Economic and Social Council NGO’s Committee.

Prof. Karl Donert is a senior academic with extensive experience in educational development in higher education and in a teaching-led, research-informed context. President of EUROGEO. Director of the European Centre of Excellence and Vice President, Council of Europe INGO Conference, Commission on Education and Culture.

A geographer by training, he is also an expert in learning and teaching with particular specialisation in academic networking and developing R&D partnerships, effective pedagogies in higher education, and the use of new technologies including e-learning.

He has a national and international profile in his specialist areas and has a strong track record in leading major international and university activities. Karl is recognised as an outstanding teacher and national leader in learning and teaching, as demonstrated by his National Teaching Fellowship. He has initiated and led significant professional networks and communities of practice including the international higher education network HERODOT, which he coordinates. He is currently researching professional development through international networks and networking in higher education. His recent research interests focus on the uses of GeoInformation in education in EU funded projects like School on the cloud, GI-Learner, Geocapabilities, YouthMetre; in this regard, he serves as an external evaluator to the iGuess (GeoInformation in several subjects) and ALAC (Active Learning, Active Citizenship) projects. He is actively involved in developing ‘spatial citizenship’ as an educational tool.