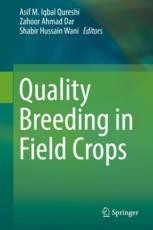 Development of superior crops that have consistent performance in quality and in quantity has not received the same emphasis in the field of genetics and breeding as merited. Specialty trait requires special focus to propagate. Yet basic germplasm and breeding methodologies optimized to improve crops are often applied in the development of improved specialty types. However, because of the standards required for specialty traits, methods of development and improvement are usually more complex than those for common commodity crops. The same standards of performance are desired, but the genetics of the specialty traits often impose breeding criteria distinct from those of non-specialty possessing crops. Specifically, quality improvement programs have unique characteristics that require careful handling and monitoring during their development for specific needs. Adding value either via alternative products from the large volumes of grain produced or development of specialty types is of interest to producers and processors.  This work assimilates the most topical results about quality improvement with contemporary plant breeding approaches.The objective of this book is to provide a summary of the germplasm, methods of development, and specific problems involved for quality breeding. In total, fourteen chapters, written by leading scientists involved in crop improvement research, provide comprehensive coverage of the major factors impacting specialty crop improvement.

Dr Asif Mohammad Iqbal Qureshi received his MSc and Ph.D. in Genetics, Plant breeding and Biotechnology from SKUAST-Kashmir India in 2006 & 2010 and qualified twice NET Examination of Agricultural Scientists Recruitment Board, New Delhi in 2010 and 2012. After Ph.D. he worked as Senior Research Fellow as  in the NAIP, ICAR Saffron project for two and half years up to October 2012 and was then selected as Assistant Professor in Genetics, Plant Breeding and Biotechnology in Bihar Agricultural University, Sabour, Bihar (2012). Dr Qureshi was then selected as Assistant Professor (GPB) and took over All India Coordinated Research Project Rapeseed-Mustard at SKUAST Kashmir as Principal Investigator funded by ICAR, New Delhi, India. In 2013. During his tenure ship, Khudwani Centre was adjudged as Best All India Coordinated Research Project Award (2015) by Directorate of Rapeseed-Mustard, Bharatpur, Rajasthan, ICAR, New Delhi, India. Dr Qureshi was selected for prestigious  Illustrious Raman Fellowship Programme by the University Grants Commission, New Delhi, for advanced research on "Marker Assisted Breeding for Quality Improvement in Dr Beans" at Michigan State University, USA for one year (2016-17). He is also the recipient of INSA Fellowship by Indian National Science Academy and has handled 5 research projects from different funding agencies and has published more than 60 research papers and is member of many national & international societies involved in Crop Improvement. He is Associated as a Breeder in the development and release of two Rapeseed-Mustard varieties Shalimar Sarson-2  & Shalimar Sarson-3 (B. rapa var. brown sarson) two rice varieties Shalimar Rice-4 (Low Atitude) and Shalimar Rice-5 (High Altitude) released by State Varietal Release Commitee at State level.
Dr. Zahoor Ahmed Dar is working as Senior Scientist (Plant Breeding) in the AICRP (Maize) Srinagar Centre (SKUAST-K) and has been a Gold Medalist at his Bachelors and Doctorate Level. He has published more than 200 Research papers in various International and National Journals. He is involved in Guiding Various Students at Masters and Doctorate Level. He has been involved in the development of fifteen varieties in Maize, Oats, Pulses and Brown Sarson. He has handled nine projects from different funding Agencies. He is the recipient of INSA Summer Research and Visiting Scientist Fellowship. He has registered more than 75 germplasm accessions of Maize with NBPGR and is a member of various societies at National and International Level involved in Crop Improvement. He has authored five books on plant breeding.


Dr. Shabir Hussain Wani is senior assistant professor at Mountain Research Centre for Field Crops, Khudwani –192101, Sher-e-Kashmir University  of Agricultural Sciences and Technology of Kashmir, J&K, India . He received B.Sc. in agriculture from Bhim Rao Agricultural University Agra, India, and M.Sc. in genetics and plant breeding from Central Agricultural University, Manipur, India, and Ph.D. in plant breeding and genetics on “transgenic rice for abiotic stress tolerance” from the Punjab Agricultural University Ludhiana, India. After obtaining his Ph.D. he worked as research associate in the Biotechnology Laboratory, Central Institute of Temperate Horticulture (ICAR), Srinagar, India. He then joined the Krishi Vigyan Kendra (Farm Science Center) as program coordinator at Senapati, Manipur, India. He teaches courses related to plant breeding, seed science and technology, and stress breeding and has published more than 100 papers/chapters in journals and books of international and national repute. He served as guest editor and reviews editor for journal Frontier in Plant Science (2015-2018). He has also edited several books on current topics in crop improvement for abiotic stress tolerance published by Springer Nature and CRC press USA. His Ph.D. research won first prize in the North Zone Competition, at national level, in India. He was awarded a Young Scientist Award from the Society for Promotion of Plant Sciences, Jaipur, India, in 2009. He is a fellow of the Society for Plant Research, India. Recently he also received Young Scientist Award (Agriculture) 2015 from Society for Plant Research, Meerut, India. He also served as visiting Scientist at Department of Plant Soil and Microbial Sciences, Michigan State University, USA under the UGC Raman Post Doctoral Fellowship programme. He has attended several international and national conferences, presenting his research.