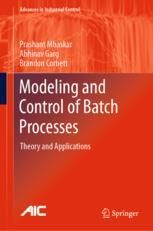 Modeling and Control of Batch Processes

Modeling and Control of Batch Processes presents state-of-the-art techniques ranging from mechanistic to data-driven models. These methods are specifically tailored to handle issues pertinent to batch processes, such as nonlinear dynamics and lack of online quality measurements. In particular, the book proposes:

The book’s proposed methodology employs statistical tools, such as partial least squares and subspace identification, and couples them with notions from state-space-based models to provide solutions to the quality control problem for batch processes. Practical implementation issues are discussed to help readers understand the application of the methods in greater depth. The book includes numerous comments and remarks providing insight and fundamental understanding into the modeling and control of batch processes.

Modeling and Control of Batch Processes includes many detailed examples of industrial relevance that can be tailored by process control engineers or researchers to a specific application. The book is also of interest to graduate students studying control systems, as it contains new research topics and references to significant recent work.

Prashant Mhaskar received the B. Tech degree in Chemical Engineering from the Indian Institute of Technology, Bombay in May 1999, the MS degree in Chemical Engineering from Louisiana State University in May, 2001 and the Ph. D. degree in Chemical Engineering from the University of California, Los Angeles in 2005. He joined the Department of Chemical Engineering at McMaster University in 2005 as an Assistant Professor, where he is currently Professor. His research interests include nonlinear model predictive control and fault tolerant control, control of hybrid systems and batch process modeling and control. Research results from Dr. Mhaskar have resulted in over 73 refereed articles in leading scientific journals and a book on ``Fault-Tolerant Process Control: Methods and Applications,'' (Springer-Verlag, London, England, 2013.) Prashant Mhaskar is a recipient of the UCLA Dissertation Year Fellowship for the academic year 2004-2005, several Best Presentation in Session Awards at the American Control Conferences, Outstanding Ph.D. in Chemical Engineering Award, had two papers selected for the Computing and Systems Technology Division Plenary Session at the AIChE meetings in 2004 and 2012, and currently holds the Canada Research Chair in Nonlinear and Fault-Tolerant Control (2016-2021). He has organized several invited sessions at the American Control Conference, co-edited a special issue of Journal of Process Control on Energy Efficient Buildings and a special issue of Computers and Chemical Engineering on Control of Complex and Networked process systems, and is currently an Associate Editor for IEEE Transactions on Control Systems Technology and Automatica.

Abhinav Garg received the B. Tech degree in Electronics and Instrumentation Engineering from Uttar Pradesh Technical University in June 2011, the Masters of Science by Research degree in Chemical Engineering from Indian Institute of Technology Madras in December, 2013 and Ph.D in Chemical Engineering from McMaster University in August 2018. His research interests include system identification, time-frequency analysis, causality analysis and process monitoring, control and optimization. His research has resulted in several peer-reviewed journal and conference articles.