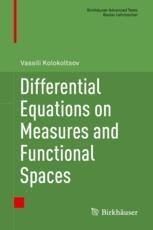 This advanced book focuses on ordinary differential equations (ODEs) in Banach and more general locally convex spaces, most notably the ODEs on measures and various function spaces. It briefly discusses the fundamentals before moving on to the cutting edge research in linear and nonlinear partial and pseudo-differential equations, general kinetic equations and fractional evolutions. The level of generality chosen is suitable for the study of the most important nonlinear equations of mathematical physics, such as Boltzmann, Smoluchovskii, Vlasov, Landau-Fokker-Planck, Cahn-Hilliard, Hamilton-Jacobi-Bellman, nonlinear Schroedinger, McKean-Vlasov diffusions and their nonlocal extensions, mass-action-law kinetics from chemistry. It also covers nonlinear evolutions arising in evolutionary biology and mean-field games, optimization theory, epidemics and system biology, in general models of interacting particles or agents describing splitting and merging, collisions and breakage, mutations and the preferential-attachment growth on networks.

The book is intended mainly for upper undergraduate and graduate students, but is also of use to researchers in differential equations and their applications. It particularly highlights the interconnections between various topics revealing where and how a particular result is used in other chapters or may be used in other contexts, and also clarifies the links between the languages of pseudo-differential operators, generalized functions, operator theory, abstract linear spaces, fractional calculus and path integrals.
Show all
About the authors

Vassili Kolokoltsov is a Professor at the University of Warwick with more than 100 papers and several monographs published. His general research interests are probability and stochastic processes, optimization and games with applications to business, biology and finances, mathematical physics, differential equations and functional analysis.

“This book should be of high interest to people who do research in differential equations or their applications in stochastic processes, optimization, mathematical physics, interacting particle systems, and chemistry. This book is a genuine asset to a researcher in these or related areas; it presents a broad view of the presented mathematical results.” (J. A. van Casteren, Mathematical Reviews, June, 2020)