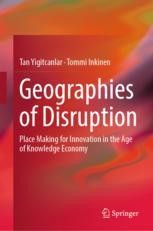 Place Making for Innovation in the Age of Knowledge Economy

This book looks at the uncharted territory between innovation activities and place making efforts to cultivate them. ‘Geographies of Disruption’ aims to fill that gap by exploring the growing importance of place making for knowledge generation and innovation activities in contemporary cities, and providing an in-depth understanding of both theoretical and practical aspects of innovation geographies and the conditions that help their emergence and growth. This book underlines the growing importance of knowledge generation and innovation activities for the competitiveness of cities and their regions. It provides an in-depth and comprehensive understanding of both theoretical and practical aspects of knowledge-based urban development and its implications and prospects for cities and regions. This pioneering book contributes to the conceptualisation and practice of innovation geographies by disseminating both conceptual and empirical research findings with real-world best practice applications. With a multidisciplinary approach to themes of technology and urban development, this book is a key reference source for scholars, practitioners, consultants, city officials, policymakers and innovation study enthusiasts.

Tan Yigitcanlar is an Associate Professor at the School of Civil Engineering and Built Environment, Queensland University of Technology, Brisbane, Australia. Along with these positions, he also carries out an Executive Director role at the World Capital Institute, Monterrey, Mexico, and an Adjunct Professor positions at the Federal University of Santa Catarina, Florianopolis, Brazil, and Open Innovation Academy, Daegu, Korea. He has been responsible for research, teaching, training and capacity building programs on the fields of urban and regional planning, development and management in esteemed Australian, Brazilian, Korean, Finnish, Japanese and Turkish universities. The main foci of his research interests are clustered around the following interrelated and interdisciplinary themes: ‘Knowledge-Based Urban Development and Knowledge Cities’, ‘Sustainable Urban Development and Sustainable Cities’, ‘Intelligent Urban Technologies and Smart Cities’. He is an Editor-in-Chief of ‘Elsevier’s Smart Cities Book Series’, the Editor-in-Chief of ‘International Journal of Knowledge-Based Development’, a Section Editor-in-Chief of ‘Sustainability’, a Regional Editor of ‘Journal of Knowledge Management’, and an Associate Editor of ‘International Journal of Environmental Science and Technology’, ‘Global Journal of Environmental Science and Management’, ‘Journal of Open Innovation: Technology, Market, and Complexity’, ‘Asia Pacific Journal of Innovation and Entrepreneurship’, and ‘Journal of Smart Cities’. Additionally, he is an editorial board member of ‘Journal of Urban Technology’, ‘Knowledge Management Research & Practice’, ‘Measuring Business Excellence’, ‘International Journal of Knowledge-Based Organizations’, and ‘Urban Science’. He undertakes the Chairman role of the annual ‘Knowledge Cities World Summit’ series, and organised conferences in many locations of the world since 2007. These locations include Monterrey (Mexico), Shenzhen (China), Melbourne (Australia), Bento Gonçalves (Brazil), Matera (Italy), Istanbul (Turkey), Tallinn (Estonia), Daegu (Korea), Vienna (Austria), Arequipa (Peru), and Tenerife (Spain). He also contributed in the organisation of other over two-dozen international conferences in various capacities. He has published his research findings extensively. These publications also include over 130 articles published in high-impact journals, and the following 11 key reference books published by esteemed international publishing houses: ‘Geographies of Disruption’ (Springer, 2019), ‘Urban Knowledge and Innovation Spaces (Routledge, 2017), ‘Technology and the City (Routledge, 2016)’, ‘Knowledge and the City (Routledge, 2014)’, ‘Sustainable Urban Water Environment (Edward Elgar, 2014)’, ‘Building Prosperous Knowledge Cites (Edward Elgar, 2012)’, ‘Knowledge-Based Development for Cities and Societies (IGI Global, 2010)’, ‘Sustainable Urban and Regional Infrastructure Development (IGI Global, 2010)’, ‘Rethinking Sustainable Development (IGI Global, 2010)’ ‘Knowledge-Based Urban Development (IGI Global, 2008)’, ‘Creative Urban Regions (IGI Global, 2008)’.

Tommi Inkinen is a Professor and a Research Director at the University of Turku. His discipline is logistical systems of maritime transportation. Previously he has been the vice chair of the Department of Geosciences and Geography at the University of Helsinki, Finland, where he worked as a Professor of Economic Geography and a Professor of Human Geography 2008 till 2016. He also holds a Docentship of Regional Studies and Economic Geography. His latest projects include “Geography and Innovative Competitiveness? Finnish Knowledge Regions in European and Global Economy” funded by the Academy of Finland. His research interests primarily cover the issues of maritime transport, logistical systems and port cities together with innovation and economic geography. These include the regional and social structuring of innovation systems, technology integration, regional development and logistics of transport. He and his research team have published extensively on these topics in international journals and collections. He is a current chairman of the International Geographical Union’s (IGU) Innovation, Information and Technology Commission and previously Editor-In-Chief of peer-reviewed quarterly journal Terra, Finnish Geographical Journal.

“​This volume, ‘Geographies of Disruption’, provides a timely contribution to the literature on the geography of innovation. It is both theoretically rich and empirically grounded, providing a detailed set of case studies on the evolving dimensions of the knowledge economy across Europe, North America, Asia and Oceania, as well as detailed case studies of innovation hubs within the knowledge precincts of cities in those regions. It focuses on the importance of place making for the emergence and spread of knowledge-based economies and delivers important insights for both scholars and practitioners on the underlying dynamics linking the innovation economy to its urban setting.” (Professor David Wolfe, University of Toronto, Toronto, Canada)

“Geographies of Disruption’ is a comprehensive and yet accessible book. Two experts on the geography of innovation and smart cities from Australia and Finland joined forces to develop a clearly written and profound analysis of innovation-geography symbiosis, including theoretical advances in knowledge economies and empirical evidence from cities and regions in the advanced industrialized economies. In-depth case studies of the Nordic model and best practice knowledge cities such as Brisbane and Melbourne, Australia, Barcelona, Spain, Austin and Silicon Valley, USA and Singapore, as well as useful benchmarking of select knowledge precincts from Finland, Ireland, The Netherlands, and the UK. A must read for policymakers and students of economic development, geography and urban planning.” (Professor Yuko Aoyama, Clark University, Massachusetts, USA)

“It is a pleasure to welcome ‘Geographies of Disruption’ to the libraries and bookshelves of scholarly urban planners, economic geographers and spatial policymakers. Professional absorptive capacity has, in general, been slow to respond to disruptions to housing markets, retail markets, the ‘hollowing out’ of industry and the inadequacies of infrastructure. Drawing on good practice case-material from a wide variety of transitioning cities, the book also explains with illuminating theory, the causes and consequences of contemporary urban disruptiveness and responses to them in an accessible and practicable way.”  (Professor Philip Cooke, the Mohn Centre for Innovation and Regional Development, Bergen, Norway)

“Geographies of Disruption’ is a seminal original contribution to the emerging field of innovation geography. It sets out to highlight the pervasive importance of a knowledge-based economy for place-based development, especially in an urban context. In addition to a framing of this new challenging field, this book offers also a wealth of informed empirical studies on several cities all over the world. For both academics, students and practitioners this study offers many novel and useful insights.”  (Professor Peter Nijkamp, Jheronimus Academy of Data Science, 's-Hertogenbosch, The Netherlands)

“This book, ‘Geographies of Disruption’, provides a comprehensive overview of innovation and place-making in contemporary cities around the world, providing a wealth of illustrative case examples and practical and policy recommendations for different stakeholders. An engaging and useful read for academics and practitioners alike.” (Professor Rob Kitchin, Maynooth University, Maynooth, Ireland)