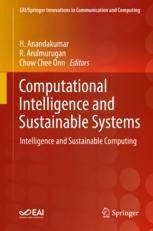 This book features research related to computational intelligence and energy and thermal aware management of computing resources. The authors publish original and timely research in current areas of power, energy, temperature, and environmental engineering as and advances in computational intelligence that are benefiting the fields. Topics include signal processing architectures, algorithms, and applications; biomedical informatics and computation; artificial intelligence and machine learning; green technologies in information; and more. The book includes contributions from a wide range of researchers, academicians, and industry professionals. The book is made up both of extended papers presented at the International Conference on Intelligent Computing and Sustainable System (ICICSS 2018), September 20-21, 2018, and other accepted papers on R&D and original research work related to the practice and theory of technologies to enable and support Intelligent Computing applications.

Anandakumar Haldorai,  Professor(Associate) and Research Head in Department of Computer Science and Engineering, Sri Eshwar College of Engineering, Coimbatore, Tamilnadu, India He has received his Master’s in Software Engineering from PSG College of Technology, Coimbatore. PhD in Information and Communication Engineering from PSG College of Technology under, Anna University, Chennai. His research areas include Cognitive Radio Networks, Mobile Communications and Networking Protocols. He has authored more than 45 research papers in reputed International Journals and IEEE, Springer Conferences. He has authored 5 book and many book chapters with reputed publishers such as Springer and IGI. He is served as a reviewer for IEEE, IET, Springer, Inderscience and Elsevier journals. He is also the guest editor of many journals with Wiley, Springer, Elsevier, Inderscience, etc. He has been the General chair, Session Chair, and Panelist in several conferences. He is senior member of IEEE, MIET, MACM and EAI research group.

Arulmurugan Ramu is a Professor in Bannari Amman Institute of Technology, Sathyamangalam, Erode, TamilNadu since 2012. His research focuses on the automatic interpretation of images and related problems in machine learning and optimization. His main research interest is in vision, particularly high-level visual recognition in computer vision. Some of the most recent work in his lab relates to fundamental technological problems related to large-scale data, machine learning and artificial intelligence. He has studied the interaction of attention and natural scene and object recognition. He is author of more than fifteen papers in major computer vision and machine learning conferences and journals. From 2011 to 2015 he was researcher fellow at the Anna University. He is the recipient of the PhD degree in Information and Communication Engineering from the Anna University, Chennai in 2015, M.Tech in Information Technology Anna University of Technology in 2009 respectively and of the B.Tech degree in Information Technology by the Aruani Engineering College in 2007.

Chee-Onn Chow received his Bachelor of Engineering (Hons) and Master of Engineering Science degrees from University of Malaya, Malaysia in 1999 and 2001, respectively. He received his Doctorate of Engineering from the Tokai University, Japan in 2008. He joined the Department of Electrical Engineering as tutor in 1999, and subsequently been offered a lecturer position in 2001. He is currently an Associate Professor in the same department since 2015. His research interests include various issues related to wireless communications. He is a Chartered Engineer (IET, UK), a Professor Engineer (BEM, Malaysia) and a Senior Members of IEEE.