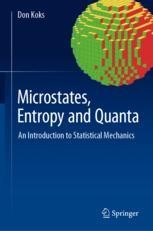 An Introduction to Statistical Mechanics

Statistical mechanics: the bane of many a physics student, and traditionally viewed as a long parade of ensembles, partition functions, and partial derivatives.  But the subject needn't be arcane.  When pared back to its underlying concepts and built from the ground up, statistical mechanics takes on a charm of its own, and sheds light on all manner of physical phenomena.

This book presents a straightforward introduction to the key concepts in statistical mechanics, following the popular style of the author's highly successful textbook "Explorations in Mathematical Physics".  Offering a clear, conceptual approach to the subject matter, the book presents a treatment that is mathematically complete, while remaining very accessible to undergraduates.

It commences by asking: why does an ink drop spread out in a bathtub of water?  This showcases the importance of counting configurations, which leads naturally to ideas of microstates, energy, entropy, thermodynamics, and physical chemistry.  With this foundation, the Boltzmann distribution writes itself in its fullest form, and this opens the door to the Maxwell distribution and related areas of thermal conductivity and viscosity.  Quantum ideas then appear: bosons via Einstein's and Debye's theories of heat capacity, and fermions via electrical conduction and low-temperature heat capacity of metals.  The text ends with a detailed derivation of blackbody radiation, and uses this to discuss the greenhouse effect, lasers, and cosmology.

Suitable for use with core undergraduate courses in statistical mechanics and thermodynamics, this book concentrates on using solid mathematics, while avoiding cumbersome notation.  All the necessary mathematical steps are included in the body of the text and in the worked examples.

Reviews of Explorations in Mathematical Physics by Don Koks, 2006

"With enjoyable and sometimes surprising excursions along the way, the journey provides a fresh look at many familiar topics, as it takes us from basic linear mathematics to general relativity... look forward to having your geometric intuition nourished and expanded by the author's intelligent commentaries."  (Eugen Merzbacher, University of North Carolina)

"... an interesting supplement to standard texts for teaching mathematical methods in physics, as it will add alternative views that could serve as additional material."  (S. Marcelja, Australian Journal of Physics)  "... a tour through the main ideas forming the language of modern mathematical physics ...it is a difficult task for the author to decide what is a good balance between the topics and their presentation, but in this case it has been achieved.  ...for those physicists who would like to be exposed to clear motivation and careful explanation of the basics of the present-day apparatus of mathematical physics."  (Ivailo Mladenov, Mathematical Reviews).

Don Koks studied at the University of Auckland in the 1980s, where he was awarded a Bachelor of Science in pure and applied mathematics and physics, and a Master of Science in physics, with a thesis in applied accelerator physics for trace-element analysis.  He was awarded a doctorate in mathematical physics by Adelaide University in 1997, with a thesis describing the use of quantum statistical methods to analyse decoherence, entropy, and thermal radiance in both the early universe and black hole theory.  He has spent a summer working on the accelerator mass spectrometry programme at the Australian National University in Canberra, and has worked in commercial Internet development in Auckland.
Currently he is a Research Scientist at the Defence Science and Technology Group in Adelaide, specialising in relativistic precision timing, satellite orbital prediction, 6-degree-of-freedom orientation concepts, and radar signal processing.  He is the author of the book Explorations in Mathematical Physics: the Concepts Behind an Elegant Language (Springer, 2006).