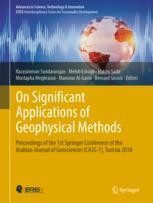 On Significant Applications of Geophysical Methods

This edited volume is based on the best papers accepted for presentation during the 1st Springer Conference of the Arabian Journal of Geosciences (CAJG-1), Tunisia 2018. This special volume  is of interest to all researchers practicing geosphysicists/seismologists, students of PG and UG in the fields of multifaceted Geoscience.  Major applications with relevant illustrations presented  in the volume are from Middle East. And therefore, this book no doubt would  serve as a reference guide to all geoscientists and students  in the broad  field of Earth Science. This volume covers  significant applications   of  gravity and magnetic methods, electrical and electromagnetic methods, refraction and reflection seismic methods besides a large number of  study on earthquakes, tectonics and geological settings etc. The salient  features  of this volume are the interpretation  and modeling of   geophysical data  of  different nature.    Main topics include: 1. Applications of gravity and magnetic methods.2. Electrical and Electromagnetic methods in mineral and groundwater exploration.3. Case studies on  refraction and reflection seismic methods.4. Integrated geoscience applications in the exploration of  subsurface resources.5. Hydrocarbon and petrophysical studies6. Earthquakes and seismic hazard assessment.7. Tectonics

Dr. Giroux holds a B.Sc.A. in engineering physics (1992) from Laval University (Canada) and a M.Sc.A. (1994) and Ph.D. (2001), both in applied geophysics from École Polytechnique de Montréal (Canada). He is currently associate professor at the Institut national de la recherche scientifique, Centre Eau-Terre-Environnement in Quebec city (Canada). His research interests include geophysical monitoring, near-surface geophysics, numerical modelling, geophysical inversion and data assimilation. Over the last years, his work focused largely on improving methods for quantitative interpretation and monitoring of CO2 storage. In 2016 Dr. Giroux joined the AJGS as an Associate Editor responsible for evaluating submissions in Applied Geophysics.