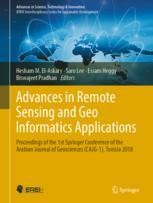 This edited volume is based on the best papers accepted for presentation during the 1st Springer Conference of the Arabian Journal of Geosciences (CAJG-1), Tunisia 2018. The book compiles a wide range of topics addressing various issues by experienced researchers mainly from research institutes in the Mediterranean, MENA region, North America and Asia.

Prof. El-Askary received his Ph.D. in Computational Sciences and Informatics from George Mason University in 2004. He is the 2015 recipient of the Chapman University's elite Senior Wang-Fradkin Professorship award. In 2016, he was named as the regional coordinator on a $3 million Euro grant from the European Union’s (EU) Horizon 2020. The three year project, known as GEO-CRADLE, deals with Coordinating and integrating state-of-the-art Earth Observation Activities in the regions of North Africa, Middle East and Balkans and Developing Links with GEO related initiatives toward GEOSS. Through this work he with the research team were able to deliver the first analytical solar Atlas of Egypt that is now considered to be the official document of the government for solar investment. This work was recently presented at Planet Earth Institute at the Royal Society in London during a seminar that discussed the future of solar energy in Africa. His research interests include dust storms monitoring and detection using different remote sensing technologies as well as studying other extreme events. He is also involved in studying air pollution problems over mega cities due to natural and man-made effects as well as climate change and its impacts on sea level rise and coral reefs for coastal areas. His research also included using earth observations in studying impact of sever dust storms anomalous chlorophyll outbreaks in the marine environment, hurricanes intensification as well as transport of microbes’ causing Kawasaki disease outbreaks. Recently Prof. El-Askary has been focusing on using earth observations for water resources management, precision agriculture along the sustainable development goals. Today Prof. El-Askary views himself as an Earth System Scientist with a major interest in natural hazards, atmospheric events and using renewable energy as the only way to address global climate change issues. Prof. El-Askary has published over a 100 refereed research publications, conferences full paper and book chapters in these research areas. Dr. El-Askary’s research has been supported by National Science Foundation, NASA, United States Department of Agriculture and European Union. Dr. El-Askary has received the Saudi Arabia award hosted by the Arab Administrative Development Organization (ARADO) affiliated with the League of Arab states for the best published article in Environmental Management among 150 articles in 2006. He is also member of the Institute of Electrical and Electronics Engineers (IEEE), AGU, EGU, COSPAR, and Phi Beta Delta Honor Society.​

Dr. Essam Heggy is a Research Scientist at the Microwave Systems, Sensors and Imaging Lab (MiXIL), at the Viterbi School of Engineering at the University of Southern California and affiliate of the Rosetta project at the NASA Jet Propulsion Laboratory. Heggy obtained both his MSc. and Ph.D. respectively in 1999 and 2002 with distinguished honors from the Paris VI University in France (UPMC-Sorbonne). His research focuses on understanding water evolution in Earth’s arid environments as well as planetary surfaces using radar surface and subsurface characterization methods. His research particularly focuses on understanding volatile evolution in the North African Sahara and Arabian Peninsula, as well as Mars, the Moon, Jovian Icy satellites and Near-Earth Objects. His work involves probing structural, hydrological and volcanic elements in terrestrial and planetary environments using different types of radar imaging and sounding techniques as well as measuring the electromagnetic properties of rocks in the radar frequency range. He is currently a member of the science team of the MARSIS instrument aboard the Mars Express orbiter (2003-present), the Mini-SAR experiment aboard Chandrayaan-1, the Mini-RF experiment on board the Lunar Reconnaissance Orbiter (2008-present), the CONSERT radar experiment aboard the Rosetta mission (2004-present) and the WISDOM GPR onboard ExoMars 2020 Rover (2008 to Present). He also edited a special JGR-Planets (AGU) volume on terrestrial and planetary radars. He is on the founding editorial board of the Journal of Arctic Geoscience ARKTOS (Springer), Geosciences (MDPI), National Geographic and co-chaired several sessions in international conferences and workshops on terrestrial and planetary radar subsurface imaging including AGU, LPSC and IEEE meetings.

Prof. Pradhan received the B.Sc. degree with honors from Berhampur University (India), the M.Sc. degree from the Indian Institute of Technology (IIT) in Bombay (India), and the M.Tech. degree in Civil Engineering from the IIT in Kanpur (India) and Dresden University of Technology (Germany). He received the Ph.D. degree in GIS and Geomatics Engineering from the University Putra Malaysia. From 2008 to 2010 he was a recipient of the Alexander von Humboldt Research Fellowship from Germany. In 2011, he received his Habilitation in Remote Sensing from Dresden University of Technology (Germany). Since March 2015, he is serving as the Humboldt Ambassador Scientist for the Alexander Von Humboldt Foundation (Germany). Dr. Pradhan is also the recipient of the prestigious German Academic Exchange Research (DAAD) Fellowship Award, Saxony State Fellowship from 1999 to 2002, Keith Atherton Research Award, and Georg Forster Research Award from German Government. He is currently Faculty Member of Dept. of Civil Engineering, University Putra Malaysia. He has more than sixteen years of teaching, research, consultancy and industrial experience. Out of his more than 450 articles, more than 276 have been published in science citation index (SCI/SCIE) technical journals. He has written two books in GIS data compression and disaster management and edited three volumes, and written 12 book chapters. He has recently submitted two new books for publication with Springer. He specializes in Remote Sensing, GIS application, and soft computing techniques in natural hazard and environmental problems. His published work has been widely cited by his peers with more than 4800 citations in SCOPUS database allowing him to reach a h-index of 47. He has completed 20 research projects. Most recently, he has been selected as a 2016 Web of Science High Cited Researcher. Dr. Pradhan is a member of many professional bodies such as Committee of Space Research (COSPAR), Senior Member of IEEE, United Nations Outer Space Research Programme (UNOOSA) and many more. He sits as a board member of many national programs in Malaysia and South-East Asia. He is a regular reviewer for many international bodies alike Dutch Research Council, European Science Foundation, Austrian Science Foundation, Research Council UK (RCUK) and many more. He has been also active with teaching and supervising of many Ph.D., MSc. and undergraduate students. Dr. Pradhan has widely travelled abroad visiting more than 55 countries to present his research findings (e.g. Germany, USA, Netherlands, UK, Switzerland, Turkey, South Korea, Japan, Indonesia, Thailand and many more). In 2013 Dr. Pradhan joined the AJGS as an Associate Editor responsible for evaluating submissions in the fields of Environmental, Geo-Informatics and Geotechnical Sciences.

Dr. Lee completed his B.Sc. in Geology (1991), a M.Sc. in GIS-based geological hazard mapping (1993) and a Ph.D. in landslide susceptibility mapping using GIS (2000) at Yonsei University in Seoul (Korea). He is currently a Principal Researcher at the Geological Research Division of Korea Institute of Geoscience and Mineral Resources (KIGAM). He is also a Professor at the University of Science and Technology (UST) in Daejeon (South Korea). He started his professional career in 1995 as a researcher at KIGAM. He spent many years as a part-time lecturer in many universities. He carried out many international cooperative research projects in the fields of mineral potential and geological hazard in Brazil, Bhutan, Cambodia, China, Indonesia, Malaysia, Philippines, Thailand and Vietnam. He also managed several times the Korea International Cooperation Agency (KOICA) International Training Program and gave lectures in the fields of Mineral Exploration and GIS/RS for participants from many countries. His research interest includes geospatial predictive mapping with GIS and RS such as landslide susceptibility, ground subsidence hazard, groundwater potential, mineral potential and habitat mapping. He has co-authored more than 100 research articles in refereed journals and is an ISI highly cited researcher (ca. 5000 citations, h-index 37). In 2015 Dr. Lee joined the AJGS as an Associate Editor responsible for evaluating submissions in Environmental, Geotechnical and Applied Sciences.