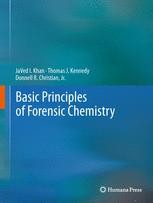 Basic Principles of Forensic Chemistry is designed to provide a clear and concise understanding of forensic chemistry.  The text begins with an introduction to the basic principles of chemistry and expands through organic chemistry into forensic investigation.  The detailed chapters focus on both the theoretical and practical aspects of forensic chemistry with emphasis on controlled substance testing and identification.  Leading experts in the field contribute general examination techniques followed by applications to more specific models.  In addition, the text contains a comprehensive collection of information and data on controlled substances commonly encountered in forensic investigation including; detailed structural analysis, physical and physiological effects, functional group reactivity, and results of analytical examination.  Also illustrated is arguably the greatest challenge to the forensic chemist: the investigation and processing of clandestine laboratory operations.  The Forensic Chemistry Laboratory Manual is included on a CD-ROM and contains a collection of practical exercises designed to support theoretical principles covered in the text.  This provides the student with valuable hands-on experience while adding clarity and continuity to the topics of discussion.

Essential and comprehensive, Basic Principles of Forensic Chemistry provides the fundamental knowledge required for a rewarding journey into the field of forensic chemistry.
Show all
About the authors

JaVed I. Khan
Mr. Khan holds a Masters of Science Degree in Biochemistry from the University of California, Riverside, a Masters of Science Degree in Biochemistry from the University of Agriculture, Faisalabad, Pakistan, and a Bachelors of Science in Chemistry/Biology from B.Z. University, Multan, Pakistan. He has more than seventeen years of experience in the field of Forensic Sciences at the California State Department of Justice in the Riverside Crime Laboratory. He is an accomplished Forensic Scientist whose expertise expands in various fields including forensic chemistry, forensic biology, and forensic toxicology. He has authored a number of publications on related topics.
Mr. Khan responded to hundreds of clandestine laboratory operations as a clandestine laboratory field expert. He examined the evidence from thousands of clandestine laboratory operations. Mr. Khan testified in various courts as a clandestine laboratory analyses expert witness. Mr. Khan is a recognized expert witness in other fields of forensics and has appeared more than three hundred times in federal, state, and local county courts in this capacity.
Mr. Khan has more than twelve years of teaching experience as a part-time college instructor of Forensic Chemistry and Biology. He has developed curriculum of forensic chemistry, forensic biology, and forensic toxicology courses for Mt. San Jacinto College in Riverside, California. He is a dedicated professional whose insight and tireless efforts provided the driving force for this project.

Donnell R. Christian
Donnell R. Christian is a PhD candidate at the University of South Africa, holds a Masters in Criminal Justice from American Military University and Bachelor’s degrees in Chemistry and Police Administration from Northern Arizona University.  He is the author of Forensic Investigation of Clandestine Laboratories (2003). His companion book, Field Guide to Clandestine Laboratory Identification and Investigation (2004) provides a ready reference for police, fire, and emergency responders who potentially encounter clandestine labs in their daily activities. Mr. Christian has published articles on the analysis, and the clandestine manufacture and analysis, of controlled substances and has developed training programs for investigators, laboratory examiners, and attorneys involved in the investigation, examination, and prosecution of clandestine labs. He also authored a chapter concerning the analysis of controlled substances in of Forensic Science, An Introduction to Scientific and Investigative Techniques (2002, 2005, 2009) and the forensic chemistry section in The Forensic Laboratory Handbook, Procedures and Practices (2005, 2011).

Mr. Christian is the Director of Forensic Programs at Professional Business Solutions, Inc. and is the former Forensic Science Development Coordinator for the United States Department of Justice’s International Criminal Investigative Training Assistance Program (ICITAP). With ICITAP, he has assisted in establishing forensic science programs in the developing democracies of Armenia, Azerbaijan, Bosnia, Bulgaria, Georgia, Haiti, Kazakhstan, Kyrgyzstan, Senegal, Turkmenistan, and Uzbekistan. Mr. Christian served as President and Chairman of the Board of Directors for the Southwestern Association of Forensic Scientists (SWAFS). Additionally, he spent fifteen years with the Arizona Department of Public Safety Crime Laboratory specializing in forensic chemistry and trace analysis, with emphasis in the clandestine manufacture of controlled substances (i.e., drugs and explosives). He has responded to hundreds of clandestine lab scenes, examined thousands of exhibits, and provided untold hours of testimony.

“This is a textbook of basic principles of forensic chemistry. … It is intended for students of forensic chemistry, specifically undergraduates majoring in criminalistics intent on a future career as a forensic examiner. This book also would be of interest to anyone with a science background … curious about today’s practice and underlying theory regarding forensic chemistry.” (Valerie L. Ng, Doody’s Book Reviews, March, 2012)

“The book focuses on literature data and on applications in the field of drug identification. … This book will be of interest to beginners and experienced scientists. This book can be recommended to laboratories in departments of criminal investigation, forensic and clinical toxicology, and doping control. The book ‘Basic Principles of Forensic Chemistry’ focuses on the characterization of seized material, covering all the aspects, from collection of evidence to interpretation. It is a helpful resource for all scientists involved in drug identification.” (Pascal Kintz, Analytical and Bioanalytical Chemistry, Vol. 403, 2012)