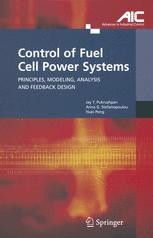 The problem of greenhouse gas (particularly carbon dioxide) release during power generation in fixed and mobile systems is widely acknowledged. Fuel cells are electrochemical devices offering clean and efficient energy production by the direct conversion of gaseous fuel into electricity. As such, they are under active study for commercial stationary power generation, residential applications and in transportation. The control of fuel cell systems under a variety of environmental conditions and over a wide operating range is a crucial factor in making them viable for extensive use in every-day technology.

In Control of Fuel Cell Power Systems the application of fuel cells in automotive powertrains is emphasized because of the significance of the contribution to global CO2 emissions made by ground vehicle propulsion and because of the challenge presented by the accompanying control problems. The authors’ comprehensive control-oriented approach provides:

• An overview of the underlying physical principles and the main control objectives and difficulties associated with the implementation of fuel cell systems.

• System-level dynamic models derived from the physical principles of the processes involved.

• Examples of the assistance of control analysis in fuel cell redesign and performance improvement.

• Downloadable SIMULINK® model of a fuel cell for immediate use supplemented by sample MATLAB® files with which to run it and reproduce some of the book plots.

Primarily intended for researchers and students with a control background looking to expand their knowledge of fuel cell technology, Control of Fuel Cell Power Systems will also appeal to practicing fuel cell engineers through the simplicity of its models and the application of control algorithms in concrete case studies. The thorough coverage of control design will be of benefit to scientists dealing with the electrochemical, materials and fluid-dynamic aspects of fuel cells.

Anna Stephanopoulou is becoming well-known among control engineers – she is now a regular on meeting program committees and as a session organizer for such leading conferences as American Control Conference and IFAC World Congress. She has also recently been appointed Associate Editor of the journal IEEE Control Systems Technology. She has previously been employed in the prestigious engineering faculty at UC Santa Barbara and at Ford Motor Company. She has received prizes for her work in automotive powertrain control, making her an ideal author for this type of monograph within the Advances in Industrial Control series.