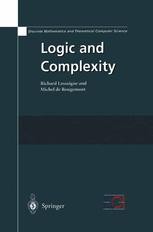 Logic and Complexity looks at basic logic as it is used in Computer Science, and provides students with a logical approach to Complexity theory. With plenty of exercises, this book presents classical notions of mathematical logic, such as decidability, completeness and incompleteness, as well as new ideas brought by complexity theory such as NP-completeness, randomness and approximations, providing a better understanding for efficient algorithmic solutions to problems.

Divided into three parts, it covers:

- Descriptive Complexity - looking at the relationship between definitions of problems, queries, properties of programs and their computational complexity.

- Approximation - explaining how some optimization problems and counting problems can be approximated according to their logical form.

Logic is important in Computer Science, particularly for verification problems and database query languages such as SQL. Students and researchers in this field will find this book of great interest.