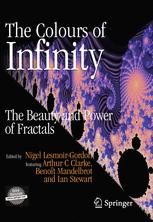 The Colours of Infinity

The Beauty and Power of Fractals

The groundbreaking documentary accompanying this book (visit extras.springer.com) is presented by Arthur C Clarke with music by David Gilmour of Pink Floyd. Introduced fifteen years ago, this brought the subject of fractals to the attention of the general public for the first time; since then it has been shown in over fifty countries around the world.

Contributors to the film are joined by other leading experts in this latest edition of ‘The Colours of Infinity’, a comprehensive survey of fractal theory and practice. Incorporating an additional chapter on the money markets by the fractal master himself, Professor Benoit Mandelbrot, the documentary has also been re-mastered providing stunning new fractal animations. A must read for anyone with an interest in the ‘beauty and power of fractals’.

Nigel Lesmoir-Gordon: Producer and Director of the original documentary, he has been an independent film and documentary maker since the 1960s. He is the co-author of Introducing Fractals with Will Rood and Ralph Edney and is currently investigating the educational applications of fractal geometry.

“The book contains nine chapters in all, with contributions from well-known figures such as Arthur C. Clarke, Benoit Mandelbrot, Ian Stewart and Michael Barnsley. … One good feature … is that rather than simply considering fractals from a theoretical point of view, an effort has been made to discuss practical applications of this interesting area of mathematics. For those who are new to the notion of fractals, this book might be worth considering … .” (Martin Griffiths, The Mathematical Gazette, Vol. 97 (539), July, 2013)

“A more up-to-date survey of the developments in the field of fractal geometry since the documentary was released. … this book provides an attractive advert for the mathematical study of fractals. Together with the corresponding documentary, it should inspire those encountering the subject for the first time to want to explore it more.” (David A. Croydon, Mathematical Reviews, January, 2013)

“This enhanced and expanded edition of the book features chapters written both by the leading experts in the field of fractal geometry and by the contributors to the film. … The book contains dozens of breath taking photographs, and the documentary … has been digitally re-mastered to include amazing new fractal animations. Both the book and the film provide plenty of useful facts about fractals in a very inspiring, delightful and aesthetically pleasant form. Warmly recommended!” (Svitlana P. Rogovchenko, Zentralblatt MATH, Vol. 1215, 2011)