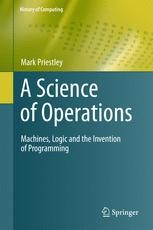 A Science of Operations

Machines, Logic and the Invention of Programming

Today, computers fulfil a dazzling array of roles, a flexibility resulting from the great range of programs that can be run on them.

A Science of Operations examines the history of what we now call programming, defined not simply as computer programming, but more broadly as the definition of the steps involved in computations and other information-processing activities.  This unique perspective highlights how the history of programming is distinct from the history of the computer, despite the close relationship between the two in the 20th century.  The book also discusses how the development of programming languages is related to disparate fields which attempted to give a mechanical account of language on the one hand, and a linguistic account of machines on the other.

This fascinating text offers a new viewpoint for historians of science and technology, as well as for the general reader.  The historical narrative builds the story in a clear and logical fashion, roughly following chronological order.

“This book is the only one existing which provides an overview of some of the most important programming language notations and computing machines, giving much attention also to the more technical aspects of programming and the discussions that surround(ed) it. It is thus an important addition to the literature and complements more externally-oriented histories of programming … .” (Liesbeth De Mol, Mathematical Reviews, May, 2015)

“Mark Priestley had carried out an important pioneering work in analysing the intellectual development of programming, and that his book raises and discusses many very interesting philosophical questions concerned with programming languages. Given the central role of computing in modern life, the jury thought that Mark Priestley’s book could form the starting point of further important philosophical investigations into the nature of programming and programming languages. For these reasons, they decided to give the book a special commendation.” (Fernando Gil International Prize, fernando-gil.org.pt, February, 2014)

“This is a book written for specialist historians, and is priced accordingly. … an important book, and one which will be of interest and use to a broad range of scholars working on topics in mathematics, logic, computing or the history of information technology more generally. … this book does it does well, and there is no comparable work encompassing such an impressive breadth of material or detail. For historians of computing, The Science of Operations will become an essential text.” (Nathan Ensmenger, British Journal for the History of Science, Vol. 45 (1), March, 2012)

“Priestley makes an important distinction in his book: that of unpacking programming from the hardware, which is an intriguing twist for the history of computing. This work will be of interest to programmers and computer scientists, as well as to a more general audience. … Although this is a work on technical programming, it could benefit from illustrations, and thus appeal to a wider readership.” (G. Mick Smith, ACM Computing Reviews, November, 2011)

“Priestley is a computer scientist who has previously published books on object-oriented design and programming. This work, which grew out of the author’s PhD thesis, is a history of computer programming and the connections between formal logic and programming. … much of the historical narrative should be accessible to all readers … . Summing Up: Recommended. History of computing collections serving graduate students through professionals and general audiences.” (B. Borchers, Choice, Vol. 48 (11), August, 2011)