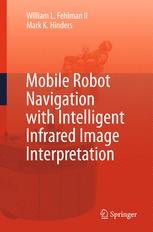 The approach described in this book is an application of Bayesian statistical pattern classification where learning involves labeled classes of data (supervised classification), assumes no formal structure regarding the density of the data in the classes (nonparametric density estimation), and makes direct use of prior knowledge regarding an object class’s existence in a robot’s immediate area of operation when making decisions regarding class assignments for unknown objects. The result is a novel classification model which not only displays exceptional performance in characterizing non-heat generating outdoor objects in thermal scenes, but also outperforms the traditional KNN and Parzen classifiers.

William L. Fehlman II is a lieutenant colonel in the United States Army. He received a BS in Mathematics from SUNY Fredonia in 1990 and MS in Applied Mathematics from Rensselaer Polytechnic Institute in 2000. He earned a PhD in Applied Science from The College of William and Mary in 2008, and is currently assigned as an Assistant Professor of Mathematics at the United States Military Academy, West Point, New York. His research interests include pattern classification, multi-sensor data fusion, and autonomous robotic systems.

Mark K. Hinders holds a BS, MS and PhD in Aerospace and Mechanical Engineering from Boston University, and is currently Professor of Applied Science at the College of William and Mary in Virginia. Before coming to Williamsburg in 1993, Professor Hinders was Senior Scientist at Massachusetts Technological Laboratory, Inc., and also Research Assistant Professor at Boston University. Before that Dr Hinders was an Electromagnetics Research Engineer at the USAF Rome Laboratory located at Hanscom AFB, MA. Professor Hinders conducts research in wave propagation and scattering phenomena, applied to medical imaging, intelligent robotics, security screening, remote sensing and nondestructive evaluation. He and his students study the interaction of acoustic, ultrasonic, elastic, thermal, electromagnetic and optical waves with materials, tissues and structures.