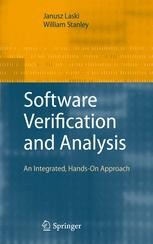 This book advocates the integrated and tool supported use of all available verification methods to improve software correctness. The following major software verification techniques and their supporting tools, based on sound mathematical models, are discussed:

VDM-SL Toolbox and SPARK illustrate, respectively, the correctness by construction and program proving paradigms. The author demonstrates that while both methods are powerful, errors are inevitable and detecting these may be more difficult than in the case of an informally developed program. Consequently, error detection must be an integral part of the entire life cycle of a programming project. Black-Box (specification based) and Structural (code based) testing are covered and supported by STAD (including 5 testing criteria). STAD also features a quite powerful descriptive and proscriptive static analysis.

Software engineers, students and computer scientists will find that the book provides the reader with a comprehensive understanding of software verification issues. STAD’s outputs allow the user to implement and test their own ideas.

The most recent version of STAD can be downloaded from http://www.stadtools.com.

"Software verification is a set of important activities in the software development process that leads to determining whether the software product fulfills requirements. … It could also be very useful to software engineering researchers and practitioners. The quality of the book is enhanced by the wide range of examples that illustrate various problems and offer appropriate solutions. The physical quality of the book is extremely high." (M. Ivanovic, ACM Computing Reviews, June, 2009)

“Software verification and validation are conducted to help ensure that programs perform correctly. … While this book’s subtitle indicates a ‘hands-on approach,’ it really takes a formal mathematical approach to describing software verification. … The book includes plenty of diagrams and figures, and it explains verification concepts with examples. This work is useful as a complement to hands-on testing books to detail the mathematical foundations of software verification. Summing Up: Recommended. Upper-division undergraduates through professionals.” (H. J. Bender, Choice, Vol. 47 (3), November, 2009)