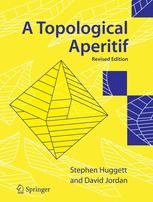 This is a book of elementary geometric topology, in which geometry, frequently illustrated, guides calculation. The book starts with a wealth of examples, often subtle, of how to be mathematically certain whether two objects are the same from the point of view of topology.

After introducing surfaces, such as the Klein bottle, the book explores the properties of polyhedra drawn on these surfaces. More refined tools are developed in a chapter on winding number, and an appendix gives a glimpse of knot theory. Moreover, in this revised edition, a new section gives a geometrical description of part of the Classification Theorem for surfaces. Several striking new pictures show how given a sphere with any number of ordinary handles and at least one Klein handle, all the ordinary handles can be converted into Klein handles.

Numerous examples and exercises make this a useful textbook for a first undergraduate course in topology, providing a firm geometrical foundation for further study. For much of the book the prerequisites are slight, though, so anyone with curiosity and tenacity will be able to enjoy the Aperitif.

"…distinguished by clear and wonderful exposition and laden with informal motivation, visual aids, cool (and beautifully rendered) pictures…This is a terrific book and I recommend it very highly."

"Aperitif conjures up exactly the right impression of this book. The high ratio of illustrations to text makes it a quick read and its engaging style and subject matter whet the tastebuds for a range of possible main courses."

"A Topological Aperitif provides a marvellous introduction to the subject, with many different tastes of ideas."

The appearance of this beautiful, modest-sized (166pp) book in this time and place is, for me personally, an instance of splendid serendipity. My reason for regarding this publication as a case of perfect timing is that my own work in number theory has begun to take a frighteningly topological turn over the last few years (in the French sense, so to speak), and some old lacunae have to be taken care of. Now! And A Topological Apéritif looks to be a great place to start.

The book would serve well for self-study and would play an important role in an introductory course as a supplementary level text to one of the established players, as I will discuss at greater length presently. It would actually also be perfect for a seminar in which various topics could then be pursued in greater depth using various supplementary sources.

I should like to preface my review proper with a few personal reminiscences for which I beg the reader's indulgence.

More years ago than I care to admit, I enrolled in undergraduate topology, at first full of enthusiasm and good intentions. But soon I proceeded to cut most of the classes because I was goofy and irresponsible and, if not in love, then heavily in like. I had become profoundly romantically infatuated with a pretty flautist whose music-department schedule allowed me to spend the hour ostensibly reserved for topology sitting on a bench near a fountain, gazing into her eyes rather than at a blackboard covered with what were to me very weird pictures. The romantic liaison did not last and I didn't learn topology (although I passed the class).

In graduate school my elective courses outside of number theory ran toward Fourier analysis, trigonometric series, and commutative Banach algebras, even though no one would accuse me of being an analyst. As regards topology, it was by now strangely and sneakily fascinating to me, having glimpsed all those delectable commutative diagrams and long exact cohomology sequences in general department colloquia and on sundry blackboards in open offices. I even had the great pleasure of attending a seminar with Karoubi, whom I was ruefully unprepared to appreciate properly (though he was impossible not to like and admire). But all in all: no real learning of topology took place for me.

I have grown more and more sorry about this gap in my knowledge over the years (although some of the problem was solved in an ad hoc fashion: teaching the subject helps, even if it's done badly). But now there is another real and pressing need to correct the problem: techniques from modern algebraic geometry have become big players in my work. I like to learn new and unfamiliar material within a framework of analogies, if possible, and so it has been my way for a while now to try to understand some of the new and high-falutin' stuff concerning, say, derived categories, by means of juxtaposing these developments against the corresponding staples of algebraic topology. (Mapping cones come to mind right away, for example.) But the shortcomings in my education in topology, described self-indulgently above, have made this approach increasingly difficult, causing me to seek a more formal course of self-study. It would be nice to go a linear route, with as one objective the development of a sort-of latter-day topologist's intuition. I think the present book by Huggett and Jordan, distinguished by clear and wonderful exposition and laden with informal motivation, visual aids, cool (and beautifully rendered) pictures, etc. fits the bill to a tee as a point of departure.

Indeed, I particularly want to recommend the book as an initial point for just about any course of studies in topology, whether it be a self-study affair such as what I'm now about to undertake, or something more in the orthodox mainstream of a college or university education in mathematics. Despite my being topologically challenged, my department has twice allowed me to teach the same undergraduate topology course which I cut so successfully almost three decades ago and I have always gone the Munkres route. My next time at bat I will introduce A Topological Apéritif as, at the very least, a supplementary text.

After such a wealth of unsolicited personal information let me now get down to some specifics regarding the book.

The authors' characterization of their book as an aperitif is right on the money. The main course (starting with Munkres' book, for example) is to be had elsewhere, as Huggett and Jordan state at the onset: "[W]e hope to whet the reader's appetite for this way of thinking," which, a sentence earlier, they describe as "conceptual and geometric rather than formulaic." And so it is that the book succeeds wonderfully at providing an intuition to the almost parochial familiarity that topologists seem to have with their specific mathematical objects - a Fingerspitzenkunde that I've grown to be more and more jealous of ....

...Note that the book's arrangement and the absence of analysis situs proper (or point set topology) disqualify the book as a solo text for a mainstream American undergraduate topology course. Hence my suggestion that A Topological Apéritif serve primarily as a supplement in such a setting. Or, as I already indicated above, it would be a marvelous experiment to use it in a student seminar, aimed at exposing the participants to topology-for-insiders, with the proviso that topics should be pursued in greater depth via other sources.

Huggett and Jordan stress that the heart of the book is the study of homeomorphisms, surfaces and polyhedra, which material they promise is pitched at the level of a second year undergraduate. With Huggett in Plymouth, UK, and Jordan in Hull, UK, this leads one to ask whether the English still refer to their graduate studies as undergraduates; I don't know. But actually it matters not: their presentation is very, very clear and accessible, and the book would be used to great advantage on either side of the pond (or anywhere else I guess).

I'm even willing to go so far as to suggest that the book is likely to contribute materially to the seduction of a number of fledgling mathematics students to topology, seeing that it hints so successfully at what can be had down the line. In fact, Huggett and Jordan unabashedly introduce the reader, by now getting to be well-versed in the topologist's jargon and particular way of thinking, to truly sexy things: in their Appendix B they have a go at the Jones polynomial.

I should like to point out also that in the chapter "Polyhedra" there is a marvelous treatment of the Euler characteristic (in its first incarnation) and its attendant applications. After dealing with the Platonic solids Huggett and Jordan go to polyhedra on a torus, then on a Klein bottle, and then on the real projective plane. They go on to consider handle-bodies and a classification theorem. And the proof of Euler's theorem they choose is that of van Staudt, using trees and the dual polyhedron. The proof also contains an en passant invocation of the Jordan curve theorem. This is all a clear example of the authors' excellent taste!

The exercises provided in the book are excellent and critical. The preface contains the warning that "Although elementary, the mathematics in this book is sharp and subtle, and will not be properly grasped without serious attempts at the exercises, the challenge of which may be undone by a premature glimpse of an illustrated solution." And then Huggett and Jordan add a pithy bit of pedagogy: "If you want to be a pianist you don't just read music and listen to it, you play it." So there!

The book ends with a brief but very nice discussion of the history of the subject, focussed on the menu served as the foregoing apéritif.

This is a terrific book and I recommend it very highly.

"A Topological Aperitif provides a marvellous introduction to the subject, with many different tastes of ideas.Stephen Huggett and David Jordan have excellent credentials for explaining the beauty of this curiously austere but potentially enormously general form of geometry". Professor Sir Roger Penrose OM FRS, Mathematical Institute, Oxford, UK