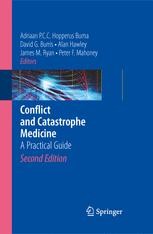 The second revised, expanded and updated edition of Conflict and Catastrophe Medicine: A Practical Guide provides a framework for use by health professionals visiting a resource-constrained environment. Since the first edition was written in 2002, there have been seismic changes following on from the terrorist assault on the Twin Towers and the Pentagon. The Middle East, the Far East and parts of Africa are convulsed by conflict, much of them verging on civil war. Further, natural disasters of staggering scale have occurred since the first edition â€“Tsunamis in South East Asia, Earthquakes in Iran, Turkey, and Pakistan and a monster Hurricane in the Gulf of Mexico. The working environment for the prospective humanitarian volunteer has changed forever.

Encompassing problems brought about by local conflict or natural disasters, this book covers preparation, organisation, logistics, treatment of major trauma and medical emergencies, and the special problems of delivering medicine in a hostile environment.

From the reviews of 1st edition:

"[R]epresents and ambitious project with a broad scope of interests. Few books take health care providers through every step of relief work, from contemplating their own motivations and suitability for the task and packing safe and practical clothing. Alternately handbook and reference book, this collection offers advise for settings in which the ‘medicine is often more straightforward than the logistics.’ It should prove most useful for providers who are inexperienced in rendering health care outside of the traditional hospital or clinic setting, whatever their level of training." (Rebecca S. Newton, NEJM, 13.03.2003, 1070-71)

"[A] very useful book for all physicians, nurses and paramedics, as well as other medical professionals who consider or plan to join the ranks of many thousands of humanitarian aid workers. This book would also be an excellent entry-level course book for various introductory courses, workshops and other educational activities. [T]his book takes an enormous step in helping to understand and act in appropriate manner. I certainly would pack this book along next time I go." (Ari Leppaniemi, Scandinavian Journal of Surgery, March 2002, vol 91, 127-128)

"I strongly recommend it for any student considering an elective, doctor considering a post-graduate posting or brief locum in an area of conflict, or administrator working with a humanitarian organization. It is an excellent book which could be made even better in a second edition." (Michael Jones, Tropical Doctor, April 2003, vol 33, 125)