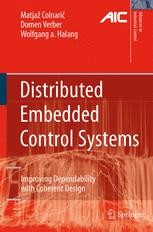 Very often, practical design of embedded systems lacks consistency resulting in computer control systems that do not provide the performance they should. Most notably they lack dependability, a key property now that programmed electronic devices are so pervasive, even in extremely safety-critical applications.

Distributed Embedded Control Systems handles the domains encountered when designing a distributed embedded computer control system as an integrated whole. First to be discussed are some basic issues about real-time systems and their properties, specifically safety. Then, system and hardware architectures are dealt with: areas like scheduling, asymmetrical distributed multiprocessor architectures, time-triggered communications, middleware, fault-tolerant peripherals, etc. Next, programming issues, embodying desired properties, basic language subsets, object orientation and language support for hardware and software specifications and co-design are elaborated and finally, the prototype implementation of a distributed embedded control system is given as a detailed example.

Different audiences will find much of interest in this work: industrial professionals are given guidelines for the design of embedded hardware and software with fault tolerance that will help them to decide which methods, tools and solutions they should employ and to which features they should pay attention. Academics have a new source of solutions and further questions to stimulate research and it will also be informative for graduate students in electrical, control and computer engineering.

Professor Colnaric has been involved in real-time research for more than fifteen years. Before that, he worked on practical industrial projects mainly designing embedded operating system kernels and other system software. Most of his research papers, co-authored with Professor Halang, have been practically oriented and some were published in Control Engineering Practice, Real-Time Systems and Annual Reviews in Control. Their book chapters have been published by Kluwer and World Scientific. Following work in the late 90s in embedded computer systems in process control and mechatronic systems he wrote a textbook on digital systems in computing (in Slovene) which is being used in the undergraduate programme of computer science at the University of Maribor. He has authored or co-authored about eighty peer-reviewed contributions to conferences.

Professor Colnaric founded and is the current chairman of the Real-Time Systems Laboratory at the Faculty of Electrical Engineering and Computer Science. He teaches courses in real-time systems, digital systems, microprocessors, and data structures and algorithms.

Beginning in 1994, he has led several scientific projects financed by Slovenian Government. In the years 2002-2005 his group participated in a 5th FW European project IFATIS dealing with intelligent fault tolerant control, designing and building a distributed embedded platform.

Matjaž Colnaric is a member of IFAC and active in its Technical Committee 3.1: Computers and Control. He is one of the four working group leaders, concerned with safety issues. He was a programme committee member for many years, and in the last two years has been the chairman of the IFAC/IFIP/IEEE Workshop on Real-Time Programming, the longest-standing conference in this area (29 years).

Professor Colnaric is one of the Editors of the journal Computing and Information Technology published by the University of Zagreb, Croatia, and is an editorial board member of Springer’s Real-Time Systems journal and of Oldenbourg’s atp International, the new international edition of the well-known German journal of practical automation.

Dr. Domen Verber is a member of the Real-time Systems Laboratory and gives the course in microprocessors and is leading laboratory work for students. He has co-authored a number of joint publications and has led a scientific project financed by the Slovenian government.

Prof. Wolfgang A. Halang is a well-known scientist in the domain of real-time system design. He is Dean of Faculty of Electrical and Computer Engineering at FernUniversität in Hagen in Germany. He has (co-) written 7 books, including the Springer titles Genetic Algorithms for Control and Signal Processing and Integration of Fuzzy Logic and Chaos Theory and a very large number of journal and conference papers. He is Editor of Springer’s Real-Time Systems journal and is on the editorial board of Multimedia Tools and Applications (Springer), Real-Time Imaging (Elsevier), High Integrity Systems (OUP) and IEEE Concurrency. Professor Halang has also guest-edited numerous journal special issues. He is chairman of the Coordinating Committee of Computers, Cognition and Communications, an important position within IFAC serving on many conference program committees and giving dozens of invited lectures to audiences both industrial and academic.

Prof. Halang has rich industrial experience, having worked in the process industry (Coca Cola and Bayer). He holds doctorates in mathematics and in computer science. He has organised a large number of scientific conferences and participated in important scientific and industrial projects.

“This book is written for designers and engineers working with embedded systems in an industrial environment as well as for researchers interested in distributed control systems, real-time architectures, programming languages, and fault tolerance.” (IEEE Control Systems Magazine, Vol. 30, February, 2010)