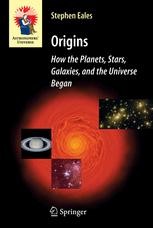 How the Planets, Stars, Galaxies, and the Universe Began

The biggest questions in astronomy are those of how the planets, stars, galaxies, and the Universe were formed. ORIGINS describes how over the last decade, astronomers have discovered the probable answers to three of these fundamental questions.

Starting with the space missions that have uncovered the haphazard history of our own planetary system, this book travels into space and backwards in time, describing the discovery of other planetary systems and their connection to extraterrestrial life. The first moments in the life of a star are covered, along with the birth of galaxies, and the biggest question of all - the origin of the Universe itself.

ORIGINS also tells the human stories behind the discoveries: the astronomers who searched for Planet X but lost a planet, the cosmic archaeologists who deciphered the history of galaxies, and of boomerang, the telescope that came back and showed that space is flat.

As an astronomer, Stephen Eales has travelled around the world, working in Cambridge, Honolulu, Toronto, and at the Space Telescope Science Institute in Baltimore. He is currently a professor of Astrophysics and Cosmology at Cardiff University, where he carries out research into the origin of galaxies.

"I’m happy to say that I don’t think author Stephen Eales has to worry about [falling short of achieving his goal]… . His ambitiously titled book is a sound and readable addition to the astronomy shelf. … It’s a fine reference, well indexed, and, in less than 300 pages, contains the history of the universe. For only one volume, it’s a great value." (Jeff Kanipe, Sky & Telescope, August, 2007)

"Eales, an astronomer at Cardiff University in Wales, has written a survey of astronomical origins, starting with our solar system and moving ever outward to the origin of the universe. … The book is well researched and has an affiliated Web site to help readers keep up with the rapid change in knowledge about our origins. … A work for general readers, it could also be a good course resource for a general education astronomy class. … Summing Up: Recommended. General readers; lower-division undergraduates." (R. A. Kolvoord, CHOICE, Vol. 44 (11), July, 2007)

"Origins, follows naturally … discussing how things came about how we found out about them, covering the origins of planets, stars, galaxies and the Universe itself. … Almost every aspect of astronomy is included in considerable detail and as with the previous volume there are many useful diagrams, some colour photos and amazingly low price for a quality product. … In addition the author provides his own version of the life of a professional astronomer and its well worth reading." (Bill Barlow, Astronomy Now, June, 2007)

"Origins is a great book—it’s concise, timely, and instructive. … Origins describes the discovery of new planetary systems in the vicinity of our Sun, and the techniques that lead to a better understanding of their formation and evolution. It makes the reader familiar with new types of telescopes and observations. … The text is kept at a fundamental and basically non-mathematical level that clearly conveys all the physical concepts … of today’s front-line astronomy research. … I warmly recommend this book." (Thomas Puzia, The Observatory, Vol. 127, December, 2007)