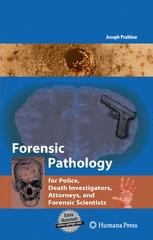 Forensic Pathology for Police, Death Investigators, Attorneys, and Forensic Scientists is a forensic pathology book specifically written for professionals who interact with forensic pathologists. The book includes sections that address various general topics which are not normally present in the typical forensic pathology text, such as descriptions of medical, pathology and forensic pathology training, basic anatomy and physiology, an overview of other forensic science disciplines, and autopsy performance. Forensic Pathology for Police, Death Investigators, Attorneys, and Forensic Scientists also covers classic topics in forensic pathology, including death investigation, death certification, postmortem changes, and the entire range of case types, ranging from natural deaths to drug-related deaths to various types of violent death. The text is written in easy-to-understand language, and is complemented by hundreds of high-quality photographs

“The book starts in a very basic manner, describing the basics of the curriculum of medical school and the basics of pathology. … provides its audience something which they normally not get in other forensic pathology books. … dealt with adequately with good illustrations using proper photographs. … a welcome addition to the long list of books on forensic pathology, especially for the audience for which it specially caters too, as for them, it is probably the best book of forensic pathology.” (Puneet Setia and Avneesh Gupta, Anil Aggrawal’s Internet Journal of Forensic Medicine and Toxicology, Vol. 12 (1), January-June, 2011)

“This is a nice book for those who are getting to grips with giving evidence in inquests, where lay explanations can be very helpful to non-medical coroners, family members and jurors. … palatable to the non-medic, be they police officers, legal professionals or interested medical secretaries. … interest to histopathology trainees and indeed those embarking on new forensic training posts.” (Amanda Jeffery, Bulletin of the Royal College of Pathologists, April, 2011)

“Prahlow is therefore to be congratulated in his remakably all-encompassing book, which is well-written for his target audience of the non-medically trained professional … . Anyone involved even at the periphery of a death investigation will find much of interest in the title, and I have no hesitation whatsoever in recommending it to them. … a valuable resource for forensic pathology trainees starting out in their careers, and I suspect that this will start to appear on the bookshelves of many such trainees … .” (Forensicmed, August, 2010)